How To Rebrand And Influence People 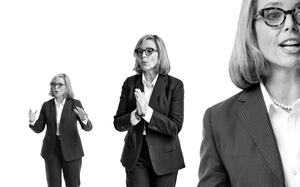 The effort includes a new logo and style guide for all communications. A redesigned website incorporating the new branding will launch in 2017. Ad campaigns, both online and off, also will roll out in 2017.

The project comes as the company’s bestseller How to Win Friends and Influence People celebrates its 80th anniversary. The organization (formerly known as Dale Carnegie Training – now referred to simply as Dale Carnegie) is also marking its 104th anniversary this week at its biannual International Convention in Huntington Beach, Calif.

As the brand has evolved over the decades, the company has remained focused on the core belief that Dale Carnegie can empower individuals to take risks, rise to challenges and contribute to boosting a company’s performance, says Michelle Bonterre, chief brand officer.

“Dale Carnegie is one of the best-kept secrets in the corporate training market, but there aren’t enough people who know about us or what we do,” Bonterre tells Marketing Daily. “Part of the reason behind the rebranding is to tell our story better, to all audiences but especially Millennials who may not be as familiar with Dale Carnegie. Dale Carnegie, the iconic global leadership train We also see the rebrand as an opportunity to reintroduce ourselves to business executives and HR managers who are considering training programs for their employees.”

The work was conceived and created by Carbone Smolan Agency with foundational research and strategy from Siegel+Gale.

In 2017, Dale Carnegie will embark on updating its entire online presence – from its corporate website to local franchisee sites worldwide. Each franchisee will also receive a toolkit for implementation of the new branding across all materials.

In addition to the global rebranding, Dale Carnegie is developing new technology that will support training participants throughout their engagement with Dale Carnegie, from the moment they register for a program until they are implementing what they’ve learned, Bonterre says.

“This effort is being led by Jonathan Vehar, Dale Carnegie’s new VP of Products who was hired specifically to help us think through how we can stay connected with our students through the use of new technology,” she says. “In addition, we are evaluating new technology that will support, sustain and reinforce the training room experience. We’ll begin to roll out some of this technology next year.”