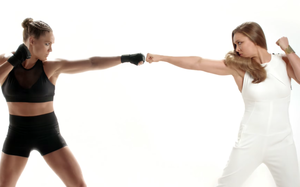 In a campaign for Reebok that launched during the summer, UFC fighter-actress-author Ronda Rousey claimed, “I am fine with not being perfect.”

The multimedia effort is built around two TV spots, “Don’t Hate Me Because I’m Strong” and “Again,” which aim to both soften and solidify her public image.

In the former, Rousey says, “Strong is beautiful,” as she goes through an intense workout. “I’m not one without the other.”

As she rattles off some of the nicknames given to her by the public — Miss Man, Savage — she transforms via Pantene from a sweaty gym rat to a long-haired brunette cover model, but without losing her attitude. “I’m about to show you what a strong woman can do.”

Rousey, 29, is 12-1 in UFC bouts, her lone loss coming in November 2015 against Holly Holm, which cost Rousey her undisputed title and also was her last fight.

In “Again,” Rousey evokes a harder-ass attitude. Exhausted via a workout, she directly addresses her critics and her upcoming UFC bout.

“I’m fully aware that I might not be the first person people think of to collaborate with a beauty brand,” Rousey wrote on her Web site. “Strength isn’t only about having muscles. It’s about having heart and finding inner confidence. So I’m honored that Pantene asked me to be part of their new campaign that encourages women to break gender barriers, break the glass ceiling and never settle.”

Rousey also has deals with Monster Energy and MetroPCS. She is starring in the remake of the 1989 film, “Road House” as well as the screen version of her autobiography, Through My Father’s Eyes: The Ronda Rousey Story, both scheduled for release in 2017.

She earns about $4 million a year in endorsements, according to industry analysts.