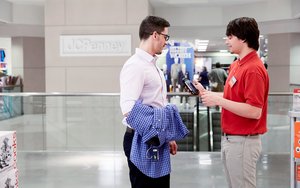 When it comes to shopping at department stores, it turns out three surprising groups — digital introverts who don't like stores, dads, and people who prize easy parking — put all the rest of us to shame. While they account for just about 16% of the population, they do 44% of the spending at U.S. department stores each year, according to a new study from Time Inc.’s Viant.

These three groups are all heavy spenders, which it defines as having spent $521 or more at department stores in the last 90 days either online or in-store, compared to about $260 for all spenders, and are led by a group it calls “Digital Introverts.”

While this group shells out almost three times as much as average department store shoppers, “what’s surprising is that, unlike traditional demographics, there is nothing about their age or gender that’s a clue to their identity,” says Rick Bruner, VP/research and analytics. “What distinguishes them is that they are less likely than other people to enjoy shopping, with just 45% of them saying they like to shop at department stores, compared to 68% overall.”

He tells Marketing Daily they are also much less likely to have any emotional connection to stores they shop in, and are even less apt to say they are motivated by their friends, either in how they dress or where they shop. What they do like, however, is a digital connection. This group, which is more likely than any other group to shop at Sears, is “significantly more likely to do online research, to highly value seamless integration and to prioritize the quality of the retailer’s website.”

Dads, surprisingly, emerged as the next-heaviest spenders. (The name is a little misleading, he says, because while 61% are male, the rest of the shoppers fitting this behavior pattern are women.) What characterizes this group is the way they “plan in advance, relying heavily on online research and over-indexing on mobile devices,” the report says.

Bruner says they are more likely to shop at J.C. Penney than other groups.

A third category is convenience shoppers, grouped together because more than anything, they want shopping made easy, with stores that have a good location, well-organized offerings, and flexible returns. Parking is key, Bruner says, “with 90% of this group giving it a high priority.”

They are less inclined to use mobile shopping options, and integration between channels matters less to them than other groups. About 67% of this segment are women.

The findings are based on data sets that include spending from more than 100 million shoppers, Nielsen’s TV and internet panels, and a survey of some 2,100 online adults.

Americans spend about $60.5 billion a year at department stores.