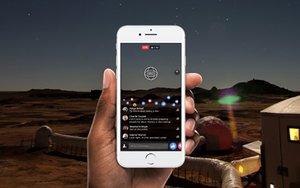 On the heels of YouTube’s debut of 4K 360 live broadcasting, Facebook is following suit with initial support for 360-degree Live streams.

The video, set to stream at noon on Tuesday, will feature a group of researchers who have spent the last 80 days in pods at Utah’s Mars Desert Research Station.

Later this month, Facebook is expected to begin offering Live 360 broadcasting via an API, and then, next year, the social giant is planning to offer an immersive, real-time video-streaming capability for all Pages and users.

Serious as ever about its video strategy, Facebook recently unveiled a major ad campaign for Facebook Live in the United States and the United Kingdom.

The multiplatform campaign includes TV and out-of-home spots -- including billboards and bus wraps -- as well as digital spots that will run both on and off Facebook’s flagship property.

Since May, the number of people broadcasting live at any given minute has risen by about 400%, according to internal figures. It is clearly an engagement magnet. Facebook has also seen that users comment more than 10 times more on Live videos than on regular videos.

The success of Live is such a big deal to Facebook the tech giant has been dishing out around $50 million to coax top media publishers and celebs to use it.