Us Feel Good About Trump 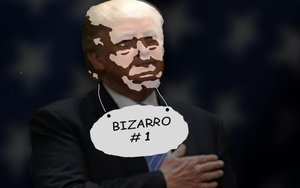 "Us do opposite of all Earthly things! Us hate beauty! Us love ugliness! Is big crime to make anything perfect on Bizarro World!" -- the Bizarro Code.

If like me, you were born under a yellow sun, then you’re probably feeling like something is wrong. Like things are happening the opposite of the way they should. Like you have suddenly entered a Bizarro World.

For those of you who are not fans of Superman -- or for that matter, “Seinfeld” -- Bizarro World is one in which everything happens opposite of the way it is supposed to happen in this world, you know, Earth.

Exactly when the two universes began converging, I cannot say, but with each passing day it seems we are living more in Bizarro World than on planet Earth.

I’ve been thinking about this column for sometime now, at least since Donald Trump was elected President. My first clue was the way some earthlings reacted to it. They got ill. I mean, physically ill. The number of people who told me they felt sick -- threw up, had diarrhea or even went to the hospital with chest pains -- the morning after Election Day was remarkable. I never saw anything like it. It was like their bodies were telling them something their minds could not process.

I predict a wave of similar reactions will be experienced on Jan. 20, 2017, when Donald J. Trump is inaugurated as Commander-in-Chief, but it already feels like we’re at war. Not a military one, though it seems telling that Trump has been stacking his administration with military personnel. A psychological one. If you haven’t read it, check out Teen Vogue’s feature on how Trump has been “gaslighting” America. It is probably the first time in my career that I ever sourced Teen Vogue for anything, but honestly, we are living in Bizarro times.

Is it any less bizarro than naming a climate change denier head of Environmental Protection Agency?

Or an ex-Goldman Sachs high roller Secretary of the Treasury?

Or a self-declared bigot Attorney General?

Or an opponent of labor rights Secretary of Labor?

Us can go on, but us can see the logic of it.

You just need to come from Bizarro World.

news, politics
2 comments about "Us Feel Good About Trump".
Check to receive email when comments are posted.
Read more comments >
Next story loading