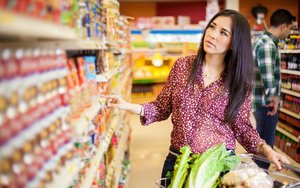 While online-only retailers like Amazon and Fresh Direct are pushing hard to win Americans over to Web-based grocery shopping, a new study shows that conventional supermarkets are doing a better job.

The research is from Brick Meets Click, and compares weekly online orders at 19 multichannel supermarket banners to online-only retailers, and finds that in more than half of the supermarkets, the average e-commerce basket is between $120 and $180. That compares to $105 for FreshDirect and $84 for Amazon Fresh.

The Barrington, Illinois-based retail consultancy says the benchmarking study analyzes grocers by average order size, average number of orders per week, lost sales as a percentage of online sales and percentage of orders with lost sales. These lost sales, which are items customers ordered but were out of stock, amounted to about 3% in dollar terms, but impacted about 40% of total orders.

The study comes at a time when interest in online grocery shopping is intensifying: Groceries account for about 19% of all consumer spending in the U.S., but typically as little as 2% of are bought online. Walmart and Target have intensified their e-efforts, and more traditional supermarkets have stepped up their efforts, in hopes of changing that. And last week, Amazon — already one of the strongest players with Amazon Fresh — threw another curve ball into the game, announcing Amazon Go, a brick-and-mortar supermarket using advanced bag-scanning technology to eliminate the checkout process.

Now Ahold Delhaize, the European-based owner of Peapod, a pure online company, as well as such U.S. supermarkets as Stop & Shop, Hannaford, Giant and Eagle, is vowing to double its e-commerce sales (currently at €2.3 billion) by 2020.

In a presentation to investors last week, Hanneke Faber, chief e-commerce and innovation officer, says that Bol.com, its online grocer serving Belgium and the Netherlands, currently generates 20% of its sales from personalization, which becomes more specific as customers browse and buy. And it’s sharing data from those transactions across all of its brands. She says that in New York, sales at its Peapod grew 25% this year.

To make online food shopping more appealing, she says the company is continuing to invest in advanced list building technology, personalizing value offers, and even creating personal health dashboards, like those used with some wearables, to show shoppers, for example, how much sugar they are eating.

Morgan Stanley estimates that online grocery sales could increase to $42 billion this year, of the $675 billion U.S. grocery market.