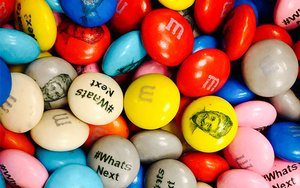 Publicis Groupe CEO Maurice Lévy has released his much-anticipated final holiday video as head of the Paris-based holding company. He’s set to retire from the post in May. Lévy has gained a widespread following and reputation for his charm and comedic talent in these annual holiday spots.

This year, the #WhatsNext video pokes fun at Lévy's departure by showing him discussing the network's past performance and wishing holiday greetings as a team of movers pack up everything in his office. The clip includes some funny moments, like showing that his office safe is full of candy and the inability of one mover to pick up his 'I'm the Boss' mug. He also honors founder Marcel Bleustein-Blanchet by adjusting his picture on the wall. Despite this activity surrounding him, Levy remains undisturbed, delivering his speech without interruption. The spot ends with an Airbnb listing showing his office is available for rental.

This year, Publicis worked with the creative team led by Anne de Maupeou, Dimitri Guerassimov and Fabien Teichner and their team at Marcel, as well as the director Romain Quirot and the production team at Prodigious. They reconstructed Lévy’s office and everyone who attended the event was able to help him “move out” by taking home an item from within the office – the desk, the chair, the candy jar, even the pens and books on his desk. The team also gave away little candy jars filled with M&M’s personalized with Lévy’s face and the hashtag #WhatsNext.

These videos weren't always so entertaining. It first started as a simple video recorded on the terrace of Publicis Groupe, but in 2008 the corporate communications team overhauled the project to make it something more meaningful and innovative.

Lévy is often behind the creative concepts himself, always pushing the limits. Typically between three and six ideas are proposed to him and the final product is always a combination of Lévy’s imagination together with the proposals put forth by his team.

Lévy once appeared in 'ads' where he wore a wig, brushed his teeth, and washed a shirt. Another year turned his greetings into a game that let viewers pick out stuffed animal bears positioned around his virtual office. The Human YouTube Player in 2013 won Publicis a Bronze Lion at Cannes. The organization actually created a “Corporate Wishes” category.

Here is a roundup of videos from recent years: