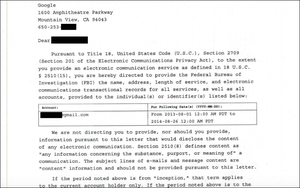 In an effort to become more transparent in its dealings with the U.S. government, Google this week shared eight letters from the National Security Agency detailing how the Federal Bureau of Investigation requested subscriber information on specific Google accounts.

Google plans to find a more permanent home for these letters and additional materials from its Transparency Report, but for now the company linked to the letter it posted online, Richard Salgado, director of law enforcement and information security at Google, explains in a blog post.

The letters range from 2010 to 2015. Some information has been redacted, such as portions of complete phone numbers and names of people. Receiving the letters has become common, but disclosing their content by posting them online is not.

Initially, Google was prohibited from disclosing the requests, but the ban has since been lifted.

Some letters from the Federal Bureau of Investigation ask for the name, address, length of service, and electronic communications records for all services, as well as accounts from specific dates and times for the named individuals.

The letter also asks Google not to "disable, suspend, lock, cancel, or interrupt service" to the subscriber or his/her accounts for fear that any interruption would alert the user of an investigation.

The letters also ask that the Google executive handling the request not refer to details during telephone conversations, but rather use a file number as a reference for verbal and written correspondence.