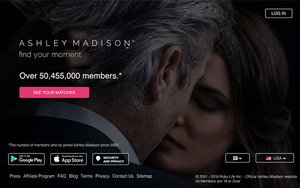 Ashley Madison has agreed to pay $1.6 million to settle charges that it failed to adequately secure users' personal information and that it duped users into paying for memberships by showing them fake profiles of women, the Federal Trade Commission said Wednesday.

The settlement comes 17 months after the extramarital dating site experienced a security breach that resulted in the names, email addresses and usernames of 36 million customers being posted online.

“This case represents one of the largest data breaches that the FTC has investigated to date," Chairwoman Edith Ramirez stated Wednesday. “The global settlement requires AshleyMadison.com to implement a range of more robust data security practices that will better protect its users’ personal information from criminal hackers going forward.”

The FTC alleged in a complaint unveiled Wednesday that Ashley Madison falsely represented that it took "reasonable steps" to secure users' information.

While the data breach drew worldwide headlines, the FTC also alleged that the company engaged in deceptive practices beyond a failure to use reasonable security. According to the agency, Ashley Madison lured people into signing up for memberships by showing them fake female profiles -- which Ashley Madison called "engager profiles."

In 2014, the site contained more than 28,400 fake female profiles, according to the FTC. Until August 2014, the site used those fake profiles to persuade 19 million Americans to pay for memberships, which enabled people to use features like online chatting.

In addition, the FTC alleged that Ashley Madison duped around 125,000 users by charging them $19 to delete their profiles, but retaining information about those people for up to 12 months.

The total settlement amount is for $8.75 million, but Ashley Madison will only pay a total of $1.65 million, with half going to the FTC and the other half to be divided between 13 states -- Alaska, Arkansas, Hawaii, Louisiana, Maryland, Mississippi, Nebraska, New York, North Dakota, Oregon, Rhode Island, Tennessee, and Vermont. The remaining $7.1 million of the judgment is suspended.

The company still faces a potential class-action lawsuit in the Eastern District of Missouri.