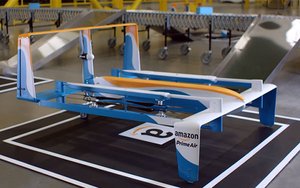 Drone delivery is now a reality for select customers in the U.K. and multiple tests are underway to do the same in the U.S.

In addition to multiple trials from cellular networks and convenience stores in the U.S., Amazon recently completed its first commercial drone delivery of items ordered online and shipped autonomously to a local resident’s front yard in the U.K.

The delivery comprised an order of an Amazon Fire TV and a bag of popcorn and took 13 minutes from order to delivery, according to Amazon.

The delivery, which took place in Cambridgeshire, England, is the first in Amazon’s private Prime Air beta program.

Amazon plans to use the beta program to collect data and feedback and ultimately expand the offering beyond a private test group.

While the program currently only includes two customers, Amazon says it plans to expand to ‘dozens of customers’ located within several miles of the Amazon Prime Air fulfillment facility.

Although commercial drone delivery like this may not happen in the U.S. with current FAA regulations, more than one test trial has been successfully achieved.

For example, 7-Eleven recently teamed up with drone delivery company Flirtey and the Nevada Institute for Autonomous Systems to deliver two packages from a convenience store to a nearby customer.

The packages included a Slurpee, hot coffee, a sandwich, donuts and candy, according to 7-Eleven. The deliveries were carried out in an FAA-designated test site.

On the connectivity side, AT&T and Verizon are both pursuing 4G LTE-connected drones at other FAA test sites in the U.S.

AT&T recently teamed up with Qualcomm to explore network-connected drones, with the ultimate goal of enabling reliable beyond-line-of-site operation of drones. This capability is a core function needed for autonomous drone delivery, but is currently prohibited by FAA regulations in the U.S.

Verizon has also been pursuing a similar vision and tests, although may be closer to bringing its vision to the market.

After successful trials with American Aerospace Technologies, Verizon recently created a certification process for device manufacturers to add 4G LTE connectivity to unmanned aircraft systems (UAS). The process is similar to the program Verizon already has in place for device manufacturers to create devices for various uses and industries, which tap into the Verizon network to function.

The Amazon Prime Air fulfillment facility appears to be specialized for drone delivery from the ground up.

Once an order is placed, the items, which need to weigh less than five pounds in total, are packed into a small box that is sent down a conveyor belt and automatically loaded into a drone. The drone travels on its own platform and track to a takeoff area outside and automatically takes flight.

It is unclear if Amazon plans to add drone delivery capabilities to current fulfillment centers or create Prime Air-only facilities.