Amid Lull In Sales, Stores Pour On Last-Minute Sugar 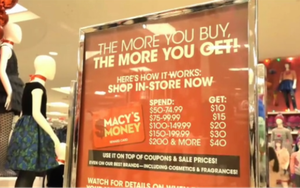 With holiday spending hitting some troubling soft spots, the country’s biggest retailers are pouring on the deals in an attempt to make the coming “Super Saturday” the biggest spending day of the year.

In its weekly analysis, the NPD Group says that in spite of plentiful online promotions, “the post-Black Friday lull was even quieter than last year,” with point-of-sale numbers in key categories falling 5% below the level of last year. Sales are only higher in one category: Athletic footwear. And for the first five weeks of the season, sales are 3% lower.

To gain ground, stores are cutting prices. “Bigger discounts mean deeper holes to climb out of to match last year’s sales numbers,” says Marshal Cohen, NPD’s chief industry analyst, in its release. “Marketers are clearly challenged to keep consumers engaged, which is further complicated by the increasing need to compete across multiple channels. However, retailers cannot continue to discount themselves off of the path to growth.”

Some experts are predicting the deal-frenzy will help Saturday, Dec. 17, referred to as Super Saturday, to eclipse Black Friday in sales volume.

Retailers aren’t just cutting prices. Stores are sweetening their deals with other incentives, as well. Walmart, for example, which says that 90% of consumers still have holiday shopping to do, is offering last-minute shoppers a free Christmas Eve Pickup promise for orders placed by 6 p.m. on Dec. 23.

And Best Buy is upgrading shoppers to free two-day shipping, with no minimum purchase. (Orders need to be placed by Dec. 21.) And it’s lowering prices on popular gift items, including the iPhone 7 Plus.

Macy’s, meanwhile, is touting 50% off many items, and offering $10 gift cards at more than 600 stores across the country.

But gains are still impressive in e-commerce sales, comScore says, with online desktop spending on the second Monday in December, often called Green Monday, climbing 15%. And online spending for the season so far is at $49.3 billion, a jump of 12%.

With the big push expected on Dec. 16, Free Shipping Day, comScore expects one last online surge. An estimated 1,125 merchants are expected to participate.