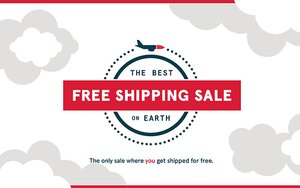 Norwegian airlines and its agency McKinney are introducing "The Best Free Shipping Sale on Earth" campaign to raise awareness for its routes. The best part: They’ll ship you free of charge to go pick up retail items ordered from destinations like Rome and Barcelona.

Travelers who visit BestFreeShippingOnEarth.com between December 16 and 20 to select an item to purchase -- such as an Italian silk scarf from Rome or a paella pan from Barcelona -- and other items shipped from cities that it flies to in Europe. People selected to receive an item will receive a complementary pair of tickets to go pick it up. Norwegian is also paying for the cost of these items.

"The holidays are a time of celebration, but they are also a time of inspiration. Because so many shoppers are focused on those elusive last-minute holiday purchases, we wanted to tap into that energy and help Americans see the holidays -- and the world -- in an entirely new way," says Ben Kaufman, marketing manager, USA, Norwegian. "We're turning the very simple idea of 'free shipping' upside down so that we can spread joy, quite literally, to the world."

The campaign is promoted with e-commerce social ads and email blasts that use the tagline, "The only sale where you get shipped for free." An integrated partnership with Thrillist, the New York-based travel blog, includes site takeovers, custom content and event activation. "We’re engaging Millennials across a range of different touch points-in person via an experiential activation and online via a mix of branded content and traditional digital placements," says Katrina Wallace, associate media director, McKinney.

The free shipping effort is the latest innovative experiential campaign from the airline carrier and its agency. Earlier this year, to showcase Norwegian’s broad range of transatlantic destinations and its new Boeing 787 Dreamliner fleet, McKinney and Norwegian created the Norwegian Aura Reader,  an OOH smart device at that combined biometrics with complex facial mapping technology. The device was placed in high traffic locations in Los Angeles and Fort Lauderdale to encourage passers-by to let Norwegian pick their next vacation destination based on their energy. Then the Reader identified those with pink, orange, yellow, green, or blue auras – a color for each of its nonstop European destinations (Copenhagen, London, Oslo, Paris or Stockholm) that Norwegian serves from Fort Lauderdale and Los Angeles.

"For example, those with a yellow aura are most often studious types who love to get their neurons firing at museums and on tours," says an airline rep. "To match their natural energy, the Norwegian Aura Reader would suggest a visit to historic London, England, and print a 'ticket' on the spot to their ideal destination. A few lucky users instantly won a pair of round-trip tickets to the city that matched their aura reading.”