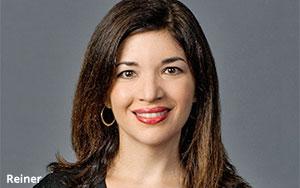 Grey veteran Debby Reiner has been promoted to CEO of Grey New York, a new position at the flagship headquarters office of the WPP agency. Reiner is the first woman to oversee Grey’s New York operation while the agency has a number of other offices  currently being led by women including operations in Japan, Poland, Malaysia, Canada, and London.

"Debby is a natural to lead our 1,100 strong flagship," stated Michael Houston Global President of Grey, who has been doing double duty running the operation prior to Reiner’s promotion. "She has been a prime mover in making Grey a creative and new business powerhouse.  Her passion, skill, dynamism and dedication to excellence have endeared her to clients and colleagues alike."

Grey claims to be the number one beauty agency in the world with iconic brands such as Pantene, Clairol, CoverGirl and an array of fragrances and credits Reiner with helping it get there.  She was also a key player in developing the agency's integrated offering encompassing digital, shopper marketing, activation and Hispanic communications.

A few years back Reiner was promoted to EVP, Partner and Global Beauty Director on P&G.  In 2013, she led the team that won the global Gillette account and later added Venus, Braun and the Art of Shaving business in 2014.

The Harvard grad joined the agency in 1989 right out of college and began working in the beauty sector. She left for JWT for a time but returned to Grey in 1999 to lead what the agency terms the “global reinvention” of Pantene.