With Rocks And E-Gifts, Nordstrom Out To Win Christmas 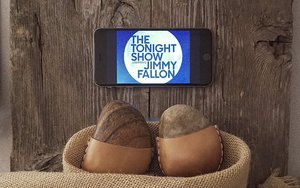 Heading into the holiday’s final heat, Nordstrom is trying some new digital tricks to win over customers. For one thing, it has taken the ever-so-impersonal gift card one step further, turning it into specific digital gifts. And for another, it has brought its leather-bound rock from gag gift to Twitter star to late-night comedy, selling it out in the process.

First, the e-gift. Let’s say you are absolutely sure your sister would love the latest Ugg bedroom slippers. Well, maybe 97% sure. Nordstrom, working with prepaid commerce provider CashStar, now lets you digitally send physical gifts by email. When she opens the digital gift, she can select the size, the color, and her preferred shipping information. And if she thinks the Uggs are ugly, she can choose another gift entirely.

It has all the perks of a gift card but shows a little more effort on the part of the sender. (While gift cards have been a holiday staple for years, the National Retail Federation reports that 50% of consumers either won’t or are reluctant to buy them.)

“We are excited to offer a new gifting solution that’s easy and personal,” says Jessica Canfield, a Nordstrom spokesperson. “With only the recipient's email address, it’s possible to quickly select a thoughtful gift.”

Second, there’s the question of the rock, an $85 stone wrapped in leather, created by Made Solid, a Los Angeles-based leather goods company. (Paperweight? Weapon? Who knows!) The gift created a bit of a tweet storm, ranging from outrage (“Why not feed some homeless people instead?” and “F*@#ing morons”) to clever, like this product review: “I was thinking about buying a pet rock, but with the winter months here I was worried that it would make my new pet cold. Not a problem anymore. This pet rock comes with its own little leather sleeping bag.”

By Dec. 8, it had sold out, but not before The Tonight Show With Jimmy Fallon got its hands on not one but two of the items for Dwayne “The Rock” Johnson for a guest appearance. (One was standard, but Nordstrom cranked out a custom jumbo model for the action-movie star.)

“We were pleasantly surprised at the excitement around this particular item,” Canfield tells Marketing Daily. “Nothing about it was expected. Our pop-in shops [where the item was carried] are where we bring exposure to new brands and small designers. We’re happy if it gave our friends at Made Solid some positive visibility.”

L2, which measures the digital impact of luxury brands, points out that it was probably more due to digital dexterity than to the stone’s Neanderthal charm. It says Nordstrom’s social media efforts typically “generate 18 times more interactions than the average brand. If any retailer knows how to make a rock in a pouch go viral, it might be Nordstrom.”