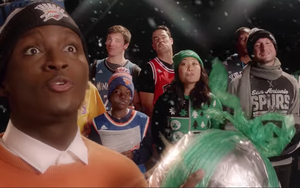 NBA players can pass, shoot, dunk, dribble and score points. But can they sing?

Several NBA stars are put to the test in a multi-platform campaign, “The Most Dunktastic Time of the Year,” to support the league’s five-game schedule on Christmas Day (ABC and ESPN).

Some of the players can carry a tune. None will make it to “The Voice.”

“It’s the most dunktastic time of the year,” Griffin, wearing a Santa hat, croons as he sits behind a piano. The others continue, “Behind-the-back-passes/While driving through traffic/Taking the ball to the hole/Slam dunks we’ll be making/Shot blocks so amazing/And three-pointers from the first row.”

A choir, comprised of fans outfitted in NBA holiday gear, chimes, “It’s the most dunktastic time of the year.”

The San Antonio Spurs mascot, The Coyote, even has a cameo.

“The Most Dunktastic Time of the Year” will break tonight (Dec. 16) during NBA games on ESPN, then go into rotation through the holidays on ESPN, TNT, NBA TV, NBA.com, BET, VH1 and elsewhere.

The NBA will also post the spots on its international Web sites.

According to the NBA, “Sometimes there is so much good NBA basketball on TV that you can't help but break into song. This Christmas, the NBA has gift-wrapped five of the season's best match-ups into one action-packed day. With the help of our players and dozens of fans, the NBA has put its own spin on the classic ‘The Most Dunktastic Time of the Year.’”

To help further spread the word about its Christmas Day schedule, an app from Musical.ly will enable people to lip-sync to the song while watching a clip from the TV spot.

The NBA will hit the streets with carolers in New York and other cities, singing "The Most Dunktastic Time of the Year." The NBA Store in NY will have “Dunktastic” activation beginning today.

NBA partners are also in on the action. Special Xmas jerseys, sweatshirts, T-shirts and hats are available from Adidas; Xmas NBA socks are from Stance.

The NBA has found a nice ratings home on Dec. 25, with this year marking the 14th time it has scheduled five games for national TV on Christmas.

Last year, a 2015 NBA Finals rematch from the previous June between the Golden State Warriors and Cleveland Cavaliers averaged almost 11 million viewers, “the most-watched Christmas game in four years,” according to the league. Overall, the Christmas 2015 five-game schedule was up 6% in viewership over 2014 on ESPN and ABC.