NBCU isn’t happy about the progress of Nielsen’s highly anticipated Total Content Ratings -- the TV research company’s effort to consolidate all traditional, digital, and other TV/video viewing under one measurement system.

In a letter written by Linda Yaccarino, chairman of advertising sales and client partnerships at NBCUniversal, and obtained by Television News Daily, she notes a number of problems.

Total Content Ratings are needed, she says, but adds: “TCR in its current form fails to deliver on this objective and does much more harm than good. Bottom line, it’s not ready for release.”

Yaccarino then lists a number of problems: That TCR has “limited” participation from the industry, because many leading pay TV and digital operators have not yet incorporated TCR. Also, TCR uses “disparate digital data collection using a mix of panel census custom measurement (YouTube) that is not yet vetted.”

Responding to NBC, a Nielsen spokesman says: “Total Content Ratings is on schedule to syndicate data on March 1 [2017], at which time Nielsen clients will be able to use the data for external purposes.”

He adds that TCR is not in its final release form -- and should be considered that way. “Up until this time, the data being released to publishers and, subsequently, to agencies is for internal evaluation only.... We continue to enhance and refine our product with ongoing updates as we work with clients during this period of evaluation.

“Nielsen does not stipulate which measurements clients should enable, nor the order in which they should enable them. Total Audience Measurement is designed to provide media owners with utmost flexibility to enable the components based on their business priorities.”

Media executives have been hopeful that TCR would be ready for the new upfront advertising market in the summer 2017.

Brian Wieser, senior research analyst of Pivotal Research Group, adds: “In whatever form it takes, we think Nielsen will still be regarded as the industry’s standard measure of video consumption, and that any flaws that may exist in the product at present will eventually be remedied.”

Wieser adds: “Ultimately, the perspectives that matter most here are not those of the networks, but of agencies and marketers, and so far as we are aware, few of those stakeholders have had significant exposure to the TCR product.” 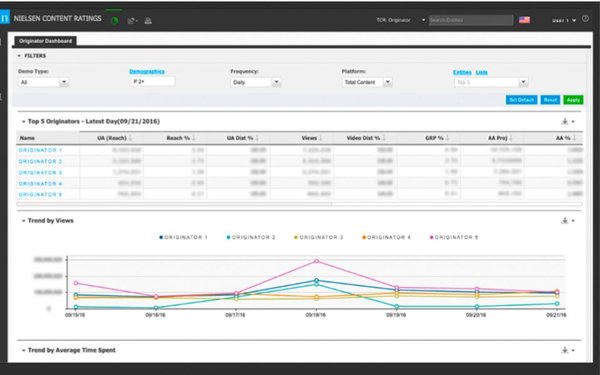