Consumers More Attached To Smartphones Than Ever 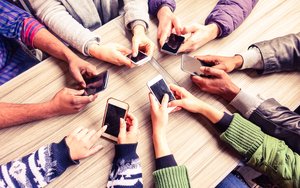 Forget “digital first.” The approach marketers may want to take in reaching people is “smartphone first.”

According to Deloitte’s Global Mobile Consumer Survey, Americans collectively check their smartphones more than 9 billion times a day and are doing so throughout the entire day, including first thing in the morning and in the middle of the night, presenting a great opportunity for marketers.

“Even if not everything is emanating out of smartphones, they offer great potential,” Craig Wigginton, vice chairman and telecommunications sector leader at Deloitte, tells Marketing Daily. “From the number of potential touchpoints to targeting, smartphones offer many alternatives to channels that were traditionally not only challenging to track but also tough to measure.”

“Even if this may not be the point to ‘sell’ to the end user, it creates another touchpoint,” Wigginton says. “It also verifies the increasing reach of smartphones and the way they are integrated in our lives.”

The smartphone has also increased the number of places marketers can reach consumers, Wigginton says. Ninety-three percent of people use their phones while shopping, followed by 90% during leisure time and 89% while watching TV. “Considering an integrated approach to offline and online marketing campaigns, and adding in the location-based promotions can help marketers move the needle more,” he says.

The ways in which consumers are using them is also changing. Text and other short forms of communication are becoming dominant across all age group demographics. Consumers also reporting using more video calls (up 45%), instant messaging (up 44%) and social media (up 35%) on their smartphones.

All of this checking has created a major consumer touchpoint for marketers, Wigginton says. “This gives a good idea in terms of the channels marketers may want to consider and prioritize. Email has traditionally been a very effective marketing tool and still seems to go strong, but with the recent increased interest in IM/Text, focusing on shorter forms of communication as an additional channel seems to be the way to go.”