Meredith Launches Magazine Based On Fork Over Knives Brand 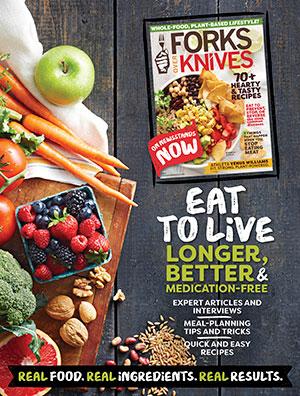 Meredith Corp. is launching a new magazine based on the Fork Over Knives brand, which originated from a 2011 film documentary championing a plant-based diet.

The Fork Over Knives magazine will hit newsstands December 27 and focus on “empowering people to live healthier by providing motivation and practical guidance,” per a spokesperson.

Forks Over Knives promotes a diet based on fruits, vegetables, tubers, whole grains and legumes. The name refers to using forks to snatch up broccoli and chickpeas, instead of a knife to cut into a steak.

The brand consequently developed into a Web site that rakes in more than 900,000 monthly unique visitors. It expanded to include four books, an app, a meal-planning service, an online-cooking school and a food-product line.

Forks Over Knives also has a Facebook following of 900,000+ users.

“Forks Over Knives is a multichannel media brand that truly resonates with the active and healthy lifestyle so important to millions of women, especially Millennials,” stated Meredith Core Media editorial director Doug Kouma.

Meredith, which publishes other wellness brands for women, such as EatingWell and Shape, likely hopes to tap into Forks Over Knives’ network of loyal followers with the launch of this magazine.

The pub will be available on newsstands for $9.99 through March 27, 2017, with a distribution of 200,000 copies. Presumably, if the launch does well, Meredith will publish additional issues.

The debut issue will feature dessert recipes that adhere to the Forks Over Knives concept, as well as a profile of tennis star Venus Williams and her plant-based diet.

The print business hasn’t impressed many this year, but publishers are willing to bet on new magazines built on successful brands. For example, Hearst has partnered with popular personalities to produce O, the Oprah Magazine and Dr Oz: The Good Life. This month, Hearst announced it was partnering with Ree Drummond, known for her blog and brand “The Pioneer Woman,” to produce a magazine for 2017.