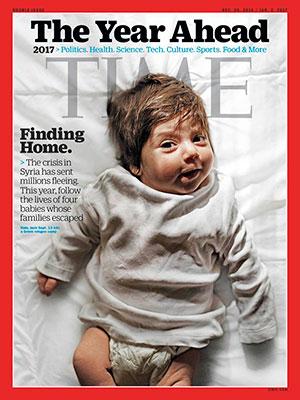 Time magazine’s fifth annual “The Year Ahead" issue has four different covers, each featuring a different Syrian refugee baby. It is part of a year-long project from Timecalled “Finding Home.”

Time’s Africa bureau chief Aryn Baker and videographer Francesca Trianni are teaming up with photojournalist Lynsey Addario to document the first year of the life of these babies and their mothers, who gave birth to them in Greece.

According to Baker, more than 1,000 Syrian refugees have given birth in Greece this year.

In a statement, Baker described the challenges these babies will face in just the first 12 months of their lives: “Wrapped in donated blankets and secondhand onesies, [the babies] will likely spend at least the first months of their new lives in hastily built refugee camps that offer little protection from winter’s freezing temperatures and summer’s swarms of mosquitoes.

"They are between worlds. In a world teeming with unknowns, about the only thing certain in their lives is that they probably won’t see their parents’ home country until they are adults, if ever.”

In her editor’s letter, Time editor Nancy Gibbs said the goal of the project is to “understand the intense and intimate challenges faced by these families.”

“Our reporting team will follow four of these babies for the next year, being present with the mothers from the delivery room to returning to their tents and managing a newborn in a setting with no hot water or flush toilets, no toys, no place to play. We will follow them through the labyrinthine asylum process and the next journey, wherever it takes them.”

“Finding Home” is supported by a grant from the Pulitzer Center. Verbatim, Getty Images’ commercial assignments agency that launched in October, is also one of the organizations supporting the project. It represents Addario for commercial projects.

The multimedia endeavor will appear in Time magazine, its Web site, in video and on social media with its own dedicated handle @FindingHome.

Time's “The Year Ahead” annual issue acts as a guide to politics, health, science, tech, culture, sports and food in the upcoming year.