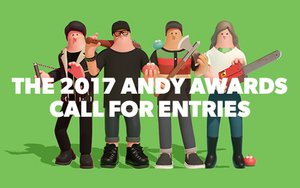 The 2017 ANDY Awards is seeking entries with a dark campaign that mocks stereotypical PSA advertising.

Developed with agency Deutsch New York, the concept seeks to save ideas from senseless deaths due to judgement calls, such as bad focus groups, legal hurdles, or distracted creative directors.

In one of three films animated by South Korean company Superfiction, the PSA introduces a creative director who receives a phone call that his wife is seeking a divorce. This puts him in a bad mood as he fights over the dog and tries to kill an idea submitted by his staff unnecessarily. Then ANDY Jury member and Burger King SVP of global brand management, Fernando Machado, steps in to announce this year's awards and invites people to call 803-620-IDEA.

The phone call is designed to act as a help line with Pete Favat, 2017 ANDY Awards Chairman telling callers that they need to do whatever it takes to defend their creative briefs and that they are not alone.

“Experiencing the death of a brave idea is gut wrenching, but we’ve all been through it. Sadly, some people get used to it,” says Favat, CCO of Deutsch North America. “Unfortunately, provocative ideas die in quiet, private places with no one watching.  We want to expose the sometimes ridiculous reasons why these ideas die every day and hopefully put a stop to it. Maybe people will use these short films to help stop the insanity and produce braver work.”

This year's concept has created an interesting challenge, says Gina Grillo, president/CEO, the Advertising Club of New York/International ANDY Awards. "One of the surprises from our end is that folks have been inquiring about entering their 'killed ideas' and taking the campaign literally.  The ANDYs obviously still only accepts work that has run and been approved by clients.”

The campaign runs through February with videos, social media supports and via banners. People can submit their entries to www.AndyAwards.com through January 13.

Last year’s theme was “Beat the Best and Win an ANDY" that included a special microsite developed by Wieden + Kennedy NY.