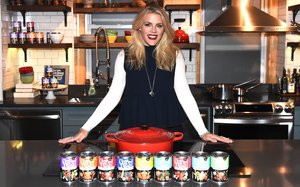 Campbell Soup Company has timed the launch of its pivotal “clean” canned soup line, Well Yes!, for the New Year, supported by a campaign that suggests making small, healthful daily choices rather than big, unrealistic resolutions.

The campaign, #WellYesMoment, is launching with a social media effort featuring actress (and mother) Busy Philipps, of “Dawson’s Creek” and “Cougar Town” fame.

Consumers will be encouraged to share a #WellYesMoment — “whether it’s taking the time to send a handwritten thank-you note to a friend or drinking a glass of water first thing in the morning” — on Facebook, Instagram or Twitter.

The social campaign will feature multiple pieces of creative and offer both video content and static images across Facebook and Instagram. Influencers will also be tapped to share personal #WellYesMoment social posts, a Campbell representative tells Marketing Daily.

In January, the brand will release videos/TV spots from BBDO New York that showcase the soups’ “chef-selected” ingredients, according to Campbell, which is not yet previewing the ads. The creative will air on television in “high-profile, primetime programming and premieres,” the company reports.

In addition, print ads will run in a broad range of women’s lifestyle, health and fitness publications.

On the sampling front, Well Yes! will have a presence at the Women’s Health Wintersköl event.

Well Yes! is one of Campbell’s key innovation bets as it seeks to reposition as a maker of convenient but natural products. It was, according to the company, the brainchild of a group of employees who set out to create soups they wanted to eat: flavorful and employing only simple, healthy ingredients such as antibiotic-free chicken, kale, quinoa, barley, beans, sweet potatoes and whole grains.

The soups come in nine varieties, including minestrone with kale, sweet potato corn chowder, and black bean with red quinoa. They contain no artificial colors, flavors, ingredients or modified starches, and come in 16.6-ounce, non-BPA lined, recyclable cans (suggested retail $2.69). No GMO-free promise is made in the promotional materials.

“We thought differently about the creation of this soup, from flavor combinations to our package design to the types of ingredients we sourced,” said Sophie Arsenlis, director of marketing, soup strategy at Campbell. “With the Well Yes! brand, we are saying ‘yes’ to real food and well-being by only using ingredients that consumers know and trust.”