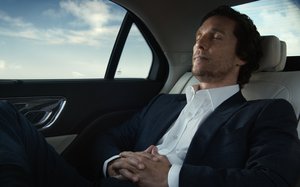 “Entrance,” the first spot for the “That’s Continental” campaign, was shot on a shimmering glacial plain about 160 miles from Reykjavík, Iceland, with black sand and shallow water offset by a stark horizon.

The new campaign, created by Hudson Rouge, is “incredibly important” to Lincoln, says John Emmert, group marketing manager, Lincoln Motor Co. The location was key to making it stand out.

“While many are familiar with the Continental nameplate, we wanted them to see our all-new flagship in a whole new way,” Emmert says in a release. “A car as iconic as Continental could only be shot in a unique locale -- one not familiar to viewers.”

Each spot in the campaign highlights a distinct quality of the Lincoln Continental. “Entrance” showcases a dramatic, sweeping view of the front of the flagship vehicle.

Other spots were shot in Los Angeles. “Crafted,” offers a wry take on nontraditional storytelling. And for the first time in a Lincoln ad, McConaughey is featured in the back seat to showcase some of the rear seat amenities available for Continental, including a chauffeur switch. The feature allows a passenger in the rear to move the front passenger seat forward for extra legroom.

Each narrative stands alone, says Emmert, but a common thread throughout deconstructs any preconceived notions viewers may hold about Lincoln -- and the all-new Continental, he says.

Print ads for Continental began running in October and were shot by Annie Leibovitz, known for her portrait photographs that have run in magazines including Rolling Stone and Vanity Fair.