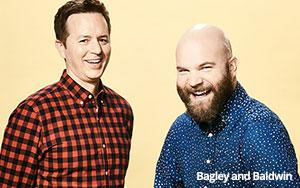 A new creative leadership team is about to take over at Wieden+Kennedy’s flagship office in Portland, OR.

The shift comes as longtime W+K creative leader and stakeholder Mark Fitzloff departs the agency at the end of the year for what the agency termed was “a new creative opportunity.” Fitzloff began as a copywriter at W+K in 1999 and became executive creative director in 2008. The agency stated that he is probably best known for leading the decade-long Old Spice campaign for P&G as well as work for Coca-Cola, Chrysler, Target, and many other blue-chip clients.

From 2013 to 2014, Fitzloff served on W+K’s global management team as co-global executive creative director. In 2014, he returned to the Portland ECD role where he has been for the past two years.

For Baldwin the new role is a promotion. He’s been with W+K since 2006 and led some of the agency’s key accounts including Old Spice, P&G (Proud Sponsor of Moms), CareerBuilder, Electronic Arts, Target, Kraft, and Levi’s. For the past year, he has been part of the leadership team building out the agency’s creative technology and product innovation offering, The Lodge, while simultaneously overseeing the agency’s work on KFC, which has been credited for the chicken brand’s recent turnaround and growth.

Bagley is returning to the agency after a stint at Deutsch Los Angeles, where he served as Chief Creative Officer, overseeing LA creative for clients including Volkswagen, Taco Bell, Dr Pepper Snapple Group, Target, and Sprint. Previously he had been at W+K since 2004, leading accounts including Old Spice, Samsung, Electronic Arts, Oreo, Trident, Kraft, Diet Coke, and CareerBuilder.

“Eric and Jason leave a ridiculous trail of great work behind them as they step into their new roles, stated Colleen DeCourcy, who was promoted to W+K Global Chief Creative Officer in October as part of a corporate restructuring that the agency described at the time as a bid to position itself properly for the future. “Naturally curious and capable across all kinds of media, these two don’t leave any opportunity on the table when building a brand.”

As to Fitzloff’s pending departure, DeCourcy added, “Mark will be missed beyond anything adequately conveyable in a press quote. His contribution to the work of this agency is ineradicable.”