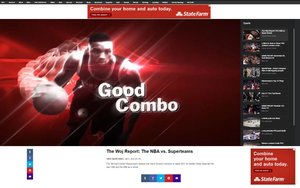 A campaign from State Farm aims to connect with consumers around NBA coverage and major events on Yahoo.

State Farm will engage fans through custom integrations across Yahoo Sports, with a special focus on The Vertical with Woj, as well as video, native and display advertising.

The insurance company, which has been a sponsor of the NBA since 2010, is collaborating with Yahoo to extend its digital advertising efforts this year and find new ways to reach basketball fans across screens, said Ed Gold, advertising director, State Farm.

"Yahoo is a long-time collaborator that has helped us continue to share our brand story with an incredibly passionate, relevant audience of sports fans,” Gold says in a release. "We recognized early on that there was huge potential with the launch of The Vertical to reach basketball fans.”

As part of State Farm’s new digital campaign, the brand will sponsor some of Yahoo Sports’ top NBA content, including The Vertical with Woj, a hub for NBA news, information and storytelling on Yahoo Sports run by NBA insider Adrian Wojnarowski.

When The Vertical launched in January 2016, State Farm was a premiere sponsor. Following this success and The Vertical’s continued growth, State Farm is back as a sponsor this season. The brand will feature its Right Combination Play campaign, featuring NBA athletes such as LA Clippers point guard Chris Paul.

State Farm will also sponsor popular editorial coverage including the Front Office Insider column from Bobby Marks. In 2017, the State Farm campaign will also capitalize on special events on Yahoo Sports such as the NBA Live Draft.