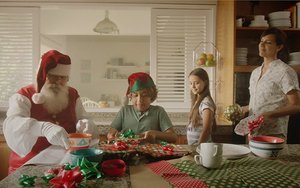 Kia Motors America is expanding its "Holiday On Us" sales event that aims to "bring joy beyond the holiday season" with its first social media campaign targeting Hispanics.

Developed with Grupo Gallegos, the five-video campaign shows Santa as a fish out of water while doing daily chores at his new home away from the North Pole.

For example, in the spot Medias (Socks), Santa folds laundry with the family’s mother and then puts a gift in several socks as if they were Christmas stockings.

Other spots include Desayuno (Breakfast) with Santa serving milk and cookies for breakfast and Platos (Plates) where the family discovers Santa has wrapped their dishes. Grassman features him trimming a snowman made of a green bush and Llegada (Arrival) introduces Santa as he clumsily enters through the chimney.

The campaign will launch on Kia Latino Facebook and on Instagram, and in addition to the five videos, the campaign will include month-long content of Santa’s happenings as he encounters his new life outside the North Pole. The effort is supported via paid media and with the hashtag #SantaEnCasa.

This is the agency’s first social media effort for Kia.