Sexual Harassment Fueled The Top Stories In TV In 2016 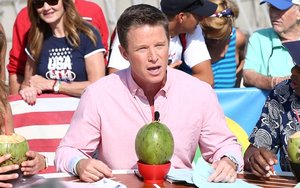 Sexual harassment and sexist conversations were the fuel that powered some of the biggest stories in television this year.

The three names that were linked the closest to these issues were Roger Ailes, Donald Trump and Billy Bush. And we all know how all of that turned out: Ailes and Bush lost their jobs, and Trump was elected President of the United States. What was it that Chuck Berry once sang? I remember now: “You never can tell.”

Bush's career was derailed because of a conversation with Trump in which the two ogled an actress and Trump talked about how women throw themselves at him. As a result of having this experience repeatedly, he seemed to claim in the now-infamous tape-recorded conversation that he was then permitted to grope their private parts if he wished to.

Whether Trump ever actually did this groping was unclear, but the conversation was so damaging to Bush that he lost his job at NBC. Trump, however, was no longer an employee of NBC, so he was free to go ahead and finish the presidential campaign, which he won.

From a media standpoint, however, the dethroning of Ailes following the sexual harassment allegations contained in a lawsuit filed by ex-Fox News personality Gretchen Carlson was probably the most stunning television story of the year.

To paraphrase something David Letterman once said of Jay Leno, referring to Leno's tenacious grip on the reins of “The Tonight Show,” until this sex-harassment lawsuit, it would have taken a team of wild horses to drag Ailes out of his job as the all-powerful potentate atop Fox News.

One of the most fascinating aspects of the story was how few people emerged in the days and weeks afterward to fly to Ailes’ defense. At first, there were a few, but as the evidence mounted that he was a habitual harasser (OK, allegedly), the attitude seemed to range from “good riddance” to “who cares?”.

The drama at the top of Fox News, and by extension, parent company 21st Century Fox, was rivaled only by the turmoil at Viacom as 93-year-old Sumner Redstone mysteriously continued to wield power from behind closed doors while speculation swirled about his competence.

Meanwhile, the real problem at Viacom seemed to be the same problem that afflicted all of basic cable this year: Shows that people wanted to watch were in short supply. The solution? Make better ones.

What else made news this year in the TV biz? Some might recall the flurry of headlines last April that accompanied Michael Strahan's announcement that would soon leave “Live with Kelly and Michael” for a job on “Good Morning America.”

Kelly Ripa felt slighted and accused ABC brass of keeping her out of the loop. The story kept TV columnists busy for a couple of days, but for most people other than this group, the reaction to Kelly Ripa being miffed was a collective yawn.

In a way, despite these few media stories, it was a relatively slow news year for television, even if much of the year’s action -- the presidential campaigns, conventions and debates, to be specific -- was played out on TV.

In the area of programming, there were no clear trends, no new genres or innovations to talk about. One trend was the periodic announcement that this or that old TV show would be “rebooted” with a new, contemporary version -- from “The Honeymooners” and “Lost in Space” to “One Day at a Time.”

Good luck with this last one -- the original “One Day at a Time” hardly seems worth the trouble and expense of a reboot, but what do I know?

This past fall, the TV industry seemed to discover all at once that it has been 20 years since little JonBenet Ramsey was found murdered in her Boulder, Colorado, home at Christmas time -- a crime that remains unsolved.

As a result, documentaries and dramatizations about the crime sprung up all over the place in a frenzy of exploitation. Only one critic that I know of complained about it too.

Oh, well -- so it was a relatively ordinary TV year. For the TV Blog, the high point of the whole year in TV came on November 2, with what seemed at the time to be the most dramatic baseball game ever played -- Game 7 of the World Series, won by the Cubs and aired on Fox.