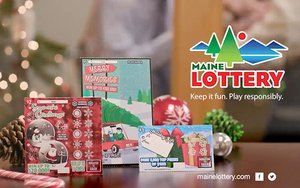 Maine Lottery and its agency Fuseideas are introducing the "Yankee Swap" campaign to encourage residents to give lottery tickets as presents and stocking stuffers. The concept illustrates how an agency can stretch a client's budget through creativity and smart spending.

Unlike TV spots for typical instant games that are available for as much as a year or more, the promotional period for holiday tickets is relatively short. As a result, the investment in production is typically smaller — and that usually does not allow for live action. But the agency found a way to do a live action spot for under $15,000.

The ad was shot in a neighboring law office of the agency’s Portland, Maine location and agency staff portrayed the Yankee Swap participants. The spot shows office workers continually taking the lottery gift basket as the coveted gift swap while holiday music plays in the background. (And who wouldn’t with competing gifts like a toilet scrubber, dingy looking socks or a flashlight?)

The spot is airing on local broadcast throughout the state of Maine and being shared on the Lottery's social channels.

“Where others only see a challenge, our Portland team wrapped-up and delivered a perfect solution," says Dennis Franczak, CEO, Fuseideas. "At Fuseideas we view every brand as a challenger brand, forever pushing the quality of marketing communications so they are recognized as leaders in their industry.”

This is the latest example of the agency's innovative and cost efficient storytelling. Since Fuseideas works with the Lottery Commissions in Maine, New Hampshire and Vermont, the agency licensed The Drifters featuring Ben E. King’s performance of “This Magic Moment” for use by all three state lotteries for the Megabucks Makes Millionaires campaign. Thus, all costs were shared across three states for the year-long six TV spot campaign.

Fuseideas became the AOR for the Vermont Lottery in 2016, AOR for Maine in early 2015, and has worked with the Connecticut Lottery since 2013.