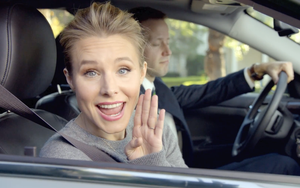 Enterprise Rent-A-Car wants people to know that it does more than rent cars, and is using long-standing alliances in sports and new deals in Hollywood to get the word out.

The company has signed actress Kristen Bell of “Frozen” fame (Anna) and NBC’s “The Good Place” to share the message that Enterprise can help you “with all of your transportation needs.”

Bell will star in a series of humorous spots, part of a broader multimedia campaign, which Enterprise will break during such events as the outdoor NHL Centennial Classic (Jan. 1) and NHL Winter Classic (Jan. 2) — both on NBC — and NCAA basketball March Madness.

Enterprise is an official partner with both the NHL and NCAA.

The company broke a campaign with actor Joel McHale during the Summer Olympics; this past summer aligned with the release of Paramount’s “Star Trek Beyond”, its first such deal with a movie studio and “most integrated marketing campaign” to date; and last month became an official partner of Live Nation, and will have a presence during concerts nationwide.

"We're upping our game when it comes to telling the Enterprise story," Lee Broughton, vp-North American brand marketing for Enterprise, said in a statement. "Whether through advertising, social media, content or other means, we want to make sure customers experience our brand on a variety of different levels, and that they are moved by the engaging stories we're telling.”

In her first commercial for the company, “If Only,” Bell says: “Everybody knows Enterprise picks you up, but can they solve all my transportation needs?”

When she ultimately tells a representative how special Enterprise makes her feel, the woman asks, “Like a princess?” To which Bell, in a nod to her “Frozen” role, smiles and says, “Exactly.”

Bell officially began her relationship with Enterprise earlier this month when she joined with fellow actresses Christina Applegate and Kathryn Hahn to support PATH, a global organization working to bring vaccines, medicine, water and even homes to underprivileged people, in which they helped move a family into a new residence using an Enterprise truck.

Bell will also star in a series of humorous digital shorts to air on Enterprise's social media properties.

In one, Bell wants to haggle over the price of an Enterprise Car Sales vehicle as if in a Wild West duel, but backs down when she learns that each vehicle comes with no-haggle pricing, according to Enterprise.

Enterprise has been an official corporate partner with the NCAA since 2005 and with the NHL since 2009.

According to Broughton, “As driving habits keep evolving, we want to keep reminding our customers that we always have their backs. Our new campaign featuring Kristen Bell really brings our brand positioning to life.”