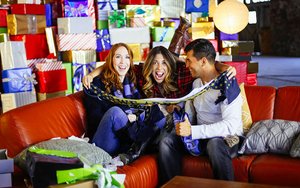 Major League Soccer and its agency MeringCarson (MC) are launching the league's first holiday specific site project to encourage people to celebrate the holidays by shopping at MLSstore.com.

The store launched in 2015, and there was a commercial developed that year to help build awareness for the new site and another brand-building concept 2016.

However, this year, MLS sought to raise awareness about its possibilities as a gift-giving resource.

The online video features a variety of people receiving licensed merchandise through a mountain of holiday gifts. MC was responsible for the concept and production.

The spot ran via the MLS Network on ESPN, FoxSports and Fox during televised MLS games, up through the championship game on Dec 10. It is appearing online with SB Nation and YouTube.

MLS also created an additional MLSstore.com retail videos on its own for use during the season and there was a campaign built around promotion of the store as well.

"In my opinion, Major League Soccer is the most exciting and innovative sports organization in the country," says Greg Carson, CCO of MeringCarson. "I love the creative. It's honest and earnest. True fans showing their true colors and loyalty to the teams close to their hearts."