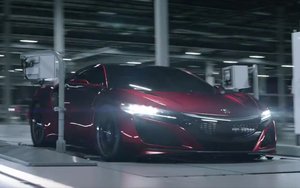 As owners begin taking delivery of their 2017 NSX Supercars throughout the U.S., Acura is launching “NSX Originals,” a campaign that brings each owner a film customized with the exact specs of their own personalized NSX.

Jay Leno, who is taking delivery of custom NSX serial number three, gets his own video. The campaign aims to reinforce the originality of the 2017 NSX; from the initial concept to the way NSX is produced and marketed, everything is customized to the owner.

All videos are hosted on a new microsite at www.nsxoriginals.com. There are seven distinct versions of the film, each showcasing the power, dynamism and beauty of the NSX, alongside a unique development technology or manufacturing process that helped bring it to life.

“The Acura NSX is a bespoke supercar inspired by an original concept, and this campaign speaks directly to that heritage,” said Jon Ikeda, vice president and general manager of Acura, in a release.

The campaign was developed by Mcgarrybowen London and is one of several customized perks of NSX ownership, including a custom 1:18 scale model, again crafted with exact exterior paint color, interior scheme, and factory-installed features (carbon fiber pieces, brake calipers, custom wheels, etc.) as each unique NSX.

Michelle Krebs, an analyst at Cox Automotive's autotrader.com, says she has never seen a campaign like this before.

“At the NSX’s price point -- $156,000 plus -- a buyer expects special treatment and unique accouterments in addition to the vehicle purchase itself,” Krebs tells Marketing Daily. “Acura has come up with an innovative approach with its 'NSX Originals' videos.”

While the NSX is a niche vehicle, it is intended to provide a halo over the Acura brand, she adds.