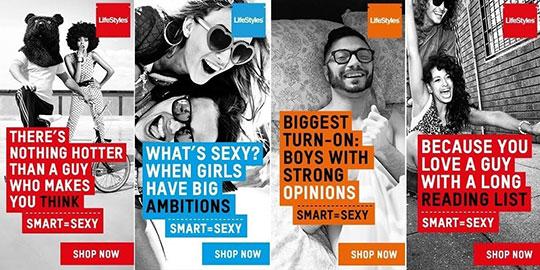 Mainstream portrayals of sex and sexuality can be clichéd.

Now, LifeStyles Condoms is introducing the “Smart is Sexy” campaign that at first glance, appears to support outdated concepts surrounding sexiness. Upon closer look, it suggests that sexy is more about intelligence, confidence, ambition, and open-mindedness.

Globally conceptualized by Germany-based +KNAUSS Agency and executed in the U.S. by the AMP Agency, the campaign kicked off simultaneously in the U.S., Brazil and Australia, with China and Europe debuting in early 2017. The effort includes digital, social and out-of-home executions.

The videos were specifically designed to be skip-able YouTube pre-roll ads and work with the Silent Autoplay Function in the Facebook timeline.

One ad, for instance, shows a beautiful girl rolling around on the floor and playing with a cat that first says "honestly, I find a guy with a big 'bleep' sexy" to reveal that the beeped word is actually personality. The clip has attracted more than 38,000 views.

“In various focus groups, millennials explained to us that self-confidence and sexiness are directly linked, and young adults need to ‘smarten up’ by recognizing that sexiness does not only come from superficial beauty, physical exposure or sexual performance, but from feeling self-confident and sexy about yourself as you are,”  Heper added.

In addition to traditional channels, the U.S. campaigns features this unique interactive vending machine activation that prompts users to answer five questions about sexual health in order to receive a free condom sample. Questions range from stats on STIs and contraception to the history of condoms.

The machine first debuted as a pop-up in New York City’s Washington Square Park on November 18 before moving to NYC’s Webster Hall before traveling to various locations including city-centers, nightclubs and bars, and colleges and universities.

Ansell reports sales growth of its sexual wellness brands that include LifeStyles and Skyn Condoms are up 8% thanks to strong growth in emerging markets, particularly China. However, Ansell did recently announce it has retained Goldman Sachs to assist in the review of "options" for this business segment.