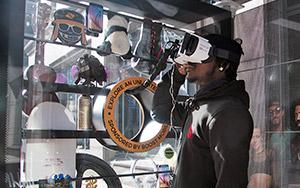 Boost Mobile's holiday exhibit within a downtown Chicago transit shelter exceeded expectations by connecting TV to digital to experiential in a unique way.

Developed with creative content and media agency Schiefer Chopshop (SCS), the project expanded upon Boost's "We Are Where You At" campaign by enclosing items representing Boost brand ambassadors from TV spots as well as a set of Samsung Gear VR goggles and a Samsung S7 phone.

"Chicago is one of our key priority markets for Boost Mobile and the placement was placed in a core vicinity of the city, heavy amongst commuters and within a couple miles of a Boost Mobile store," says Jeff Roach, president, CSO, SCS.

SCS partnered with Atomic Props to create and install the glass case, which required careful design and creation to house the various elements. "All of the items in the glass case represented people from our campaign," says Roach. "Rob Machado’s surfboard, the panda plush and microphone to represent Desiigner, MMA fighter gloves and chain for Rampage Jackson, skateboard wheels to represent our pro skaters Chris Chann and Terry Kennedy."

The agency then worked with VR Playhouse in the development of the VR app and customized a VR app for this specific installation that housed the content on the local device so it would work without internet or VR app store connectivity, and created an instance of the app that would ‘loop’ and to be ‘always on’ for this experiential version, says Roach.

Theft was not a problem. "We built custom housings to hold the VR glasses and phones that would not allow a user to remove the phone or VR glasses, with a security device that bolted the VR headset to the TSA with heavy industrial chain," says Roach.

The response from consumers and Boost Mobile stores has been positive, says Roach. "It allowed us to take the TV commercial an bring it to life in interactive VR and bring a digital experience to the streets."