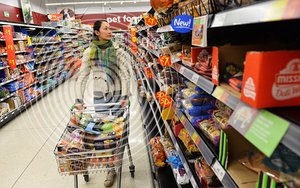 As another year wraps, it’s time to take a look back to see what interested you most in the world of the Internet of Things.

So here’s a quick recap of what most of you read here, with links in case you want to catch up on something you may have missed.

Of the 10 most read of this daily column, content that focused on location was the most viewed.

Two of those had to do with beacons, one relating to an acquisition (Beacon Maker Gimbal Acquired By Mobile Advertising Firm) and the other about the combination of beacons, GPS and Wi-Fi to determine more precise location (Beacons, GPS, Wi-Fi Combo: The New Mobile Presence).

The third location-related story that most interested most of you had to do with smart lights in stores being used to determine the precise location of shoppers (Smart Lights In Stores Can Pinpoint Shoppers To Within 8 Inches For Messaging).

After location, stories relating to smart homes drew the most attention. One was about video doorbells (Video Doorbell Leads Smart Home Holiday Shopping Lists) and the other with the overall size of the smart home market (Smart Homes Hit 13 Million, Up 56%; On Way To 46 Million)

Another element of the Internet of Things during the last year related to wearables, such as smartwatches and fitness trackers.

Two stories dealing with wearables also made the top 10 most read, with one dealing with the abandonment rate of the devices (Fitness Tracker Abandonment Rate: 30%; Smartwatch, 29%) and the other relating to tracker activity (Wearable Fitness Tracker Activity: Fitbit 73%, Under Armour 7%; Brand Messaging Tags Along).

Rounding out the lot was one dealing with the potential future (British Airways Could Give Passenger A ‘Digital Pill’) and one based on an event at SXSW that dealt with brands (Brands Moving Into The Internet Of Things).

Finally, topping the list was a story that is core to the Internet of Things as it relates to marketing, advertising and brands: 64% Look To Internet Of Things To Create Better Customer Experiences.

So that’s the wrap for the end of this year.

As we close out a year of many innovations, advancements and learnings around the Internet of Things, we’re just days away from the annual CES mega-show in Las Vegas, where some indicators of what lies ahead will be on full display.

Based on some of that lineup we’ve seen in advance, 2017 will not be a boring year for the Internet of Things.