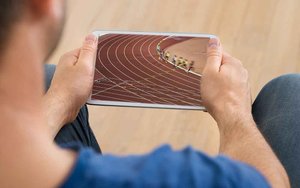 Live TV viewing losses slowed down in the third quarter of 2016 -- but Internet usage on smartphones continues to spike.

Live TV viewing dipped one minute to 4 hours and 6 minutes a day for adults 18 years and older in the July-September 2016 period versus the same period in 2015, according to Nielsen. It had dropped 6 minutes from 2014 through 2015.

The Rio Olympics aired this summer, and the 16-day period of the Olympics brought lots of live viewing, according to analysts.

Smartphone usage soared during the Olympics to two hours and 10 minutes -- almost double that of the same period a year before, when it was one hour and 14 minutes. Internet usage on PCs also rose -- from 6 minutes to 57 minutes a week. Time on tablets grew, too -- from four minutes to 27 minutes per day.

Older media technology also maintained its levels -- or rose slightly -- compared to a year ago.

DVR/time shifted viewing stayed virtually the same -- up one minute to 29 minutes up from 28 minutes in 2015 and 28 minutes in 2014. AM/FM radio also gained some: two minutes higher to 1 hour and 52 minutes. Game console time was at 13 minutes -- the same as the year before.