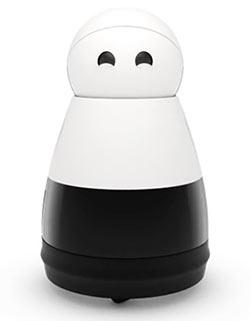 Mayfield Robotics and its agency Eleven are launching the "Kuri Doesn't" campaign to raise awareness for the first-of-its-kind home robot Kuri that is making its debut during this week's Consumer Electronics Show (CES) and will begin shipping during holidays 2017.

The campaign uses humor to make the 14-pound, two-foot robot human-like and demonstrate his capabilities, including a HD-camera to allow people to monitor pets and wi-fi and Bluetooth connectivity to enable him to read bedtime stories. (The Redwood City-based tech company calls Kuri "him" in all copy.)

Eleven created four different vignettes to showcase how "Kuri can connect with us and can bring technology to life by shining a spotlight on how it can understand context and surroundings, recognize specific people, and respond to questions with facial expressions, head movements, and unique sounds," according to the agency. The idea is that if viewers experience Kuri’s personality, awareness and mobility in realistic home scenarios, it will pique interest and people will want to find out more about the robot’s capabilities.

The “Bianca” spot, for instance, introduces a party girl to say that unlike roommates Kuri doesn't judge when you come home drunk. Meanwhile, the “Parrot” ad compares Kuri to a pet parrot to indicate that Kuri doesn't repeat things that may anger other people. The robot's tagline is "a loyal little home robot with a cheerful personality."

The campaign appears on digital networks like Hulu, and there will be promoted social posts and podcast influencer partnerships.

Eleven also designed a website to educate people about Kuri's features and capabilities, as well as provide an idea of what it is like to live with him. The site also enables pre-orders for the robot with a $100 deposit and the remaining $599 balance due at shipping.