CES And The Brands Of The Internet Of Things 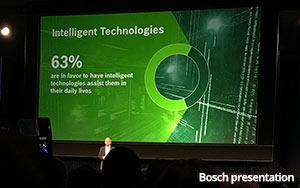 One of the striking evolutions of the Internet of Things highlighted at this year’s CES is the scope of major brand involvement in very many ways.

However, this not an age of a PC operating system such as Microsoft entering and dominating a market at a particular time in history. The IoT market is much bigger than that.

At CES two years ago, there was an inkling that the Internet of Things, or at least mass connectivity, caught the attention of some rather large global players.

At CES last year, many well-known companies introduced some rather leading-edge products, ranging from smart refrigerators to some early virtual reality products.

At CES this year, it’s a whole different universe -- with company after company fully embracing and promoting the Internet of Things as now part of their corporate DNA.

This is not a small deal.

For example, LG announced that virtually all LG home appliances --  and there are many --  would now come with smart Wi-Fi. This is a massive move to Internet connectivity of home appliances.

For connected and smart devices, American consumers may be faced with products from brands that are not household names to them. This will be a marketing challenge for some of the companies, but most are financially well-heeled enough for a mega-market push, which is where much of the IoT money will soon flow.

The commitment of major business entities to the Internet of Things at CES year cannot be underestimated.

“We are more enthusiastic as ever about the Internet of Things,” said Werner Stuth, member of the board of Bosch in Germany. “By 2020, we want to make all our products connected.”

Hisense, which took over the Sharp brand and is pitched as China’s largest manufacturer, is launching a new line of high-quality TVs in the U.S.

Samsung, well-known for smartphones, notwithstanding the recent Note 7 fire ‘issue,’ promoted that every Samsung TV now will be a smart TV.

The bottom line is that new IoT products can come from companies that U.S. consumers have not traditionally been buying from.

However, these companies may be producing the best and most adopted IoT products in the next year or two.

The brands of the Internet of Things is still up for grabs.