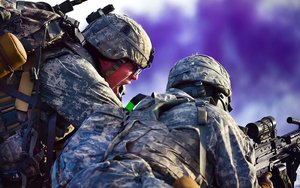 The U.S. Army has issued an RFP for its next ad and marketing program contract, which is potentially valued at $4 billion over ten years.

IPG’s McCann is the current incumbent and is expected to defend, but declined to comment on the review. McCann Worldgroup was given an extension on its current ad contract with the U.S. Army in November of 2015. The Army’s agency review was initially scheduled for 2015, but was delayed until now. McCann’s current contract is set to expire in September of this year.

The base contract of the new pact would have an initial five-year term but potentially, the new agreement could span 10 years if options to extend are exercised. The full contract value over ten years is $4 billion, per the RFP.

The scope of work is focused primarily on recruitment. According to the RFP, the work would cover marketing efforts for the “Active Army, Army Reserve, Army Civilian workforce, and the Army National Guard. In addition, campaigns may be required for influencer and multi-cultural markets.”

The RFP adds: “To accomplish the recruiting mission the marketing campaign [created by the selected agency] must successfully: Transform and change the mindset of the target audiences by educating prospects and influencers that the Army is the most engaged, versatile and technologically savvy of the military services; Create strong Army Brand recognition and equity; Showcase the depth, breadth and value of Army opportunities to all qualified individuals and their influencers: [and]Inspire internal and external audiences with the history and values of the Army as it leads the way to new technologies, new ways of thinking and new frontiers of national defense.”

Planning and tactics are also part of the scope of work, as well as media services, per the RFP. “These include: development and production of creative; planning and purchasing of media; strategic planning/research; local marketing; event marketing; interactive marketing; promotions marketing; public relations; multi-culture advertising; as well as online and social media.”