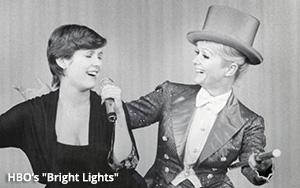 HBO’s Carrie Fisher/Debbie Reynolds documentary premiering this weekend is nothing if not timely.

Apparently originally slated to air some time later this year, HBO bumped up the premiere date to Saturday (January 7, at 8 p.m. Eastern) in the wake of their deaths one day apart late last month.

It was a celebrity-death story bordering on gothic. Carrie, 60, had a heart attack on an airline flight from London to Los Angeles and died on December 27. Her mother, Reynolds, 84, died the next day following a stroke she suffered reportedly after learning of her daughter’s death.

The fact that their deaths occurred during the oddball week between Christmas and New Years, when life doesn’t proceed at its normal pace and real “news” is relatively scarce, made the story even more conspicuous, and also poignant.

They were Hollywood’s best-known mother-daughter tandem. Their relationship was so notorious and public -- due mainly to Carrie making it a centerpiece of her writing and one-woman stage acts -- that Debbie’s death a day after her daughter’s could make one wonder if Debbie timed her own death in order to upstage her daughter’s.

It’s tasteless to think that (and also irrational), but such are the thoughts one can’t help having when thinking about these two. With their deaths still fresh in our minds, this HBO documentary provides a 90-minute glimpse into their lives and their relationship.

It helps explain (although not completely) why the death of Carrie might have hastened Debbie’s. They seemed to have had one of those co-dependent relationships that on the one hand seems sweet and on the other hand comes across as a little too close.

Among other things, this documentary -- titled “Bright Lights: Starring Carrie Fisher and Debbie Reynolds” -- reveals that they lived in houses located next-door to each other in Beverly Hills in a “compound” that was built originally by movie actor Robert Armstrong (best-known for his starring role in the original “King Kong”).

Carrie and Debbie are the undisputed stars of “Bright Lights,” which was co-directed by Alexis Bloom and Fisher Stevens. Also “starring” but not as prominently billed is Todd Fisher, Carrie’s brother and, like her, the offspring of Reynolds and her husband for a time, singer Eddie Fisher.

After four years of marriage, Eddie Fisher left Reynolds for Elizabeth Taylor in 1959 -- which became one of the most infamous celebrity-scandal stories of its era. It was a long time ago, and occurred at a time when many of us were not alive.

And yet it is a well-remembered story today because of Debbie’s and Carrie’s efforts to keep it alive. They both made it part of their public repartee, along with their relationship.

Debbie used to bring the teenage Carrie out on stage to sing during her nightclub act (footage of which is included in the documentary) and Debbie was Topic A for Carrie’s various books, one-woman stage shows and the 1990 movie “Postcards from the Edge.”

That movie, based on a 1987 autobiography by Fisher and directed by Mike Nichols, had Meryl Streep and Shirley MacLaine playing fictionalized (but not very) versions of Fisher and Reynolds, respectively.

All of this is explored in great detail in the documentary, which sometimes plays like a long therapy session for Carrie Fisher. It even ends with Fisher saying, “Alright, we have to stop, as my therapist likes to say.”

If you’ve ever had a friend or relative for whom every encounter or conversation ends up being about them and their issues with their mothers, then you get an idea of what much of this documentary is like.

That is not to condemn it, however. On the contrary, it’s a great documentary well worth watching. Previewing it on Friday morning (thanks to HBO), I came away asking myself who was more fascinating -- Debbie or Carrie. And I have no ready answer.

Though Carrie seemed to have found a modicum of contentment, the documentary reveals that she was still in some ways a train wreck. For one thing, she clearly smoked too much, possibly contributing to the heart attack that killed her.

The documentary shows also that Debbie was physically diminished in her last years too, although she continued to perform and make various public appearances.

It’s possible her death was an emotional response to Carrie’s, but at the same time, neither woman was in the best of health. Their deaths might have been more or less coincidental, although the legend of them dying just hours apart due to their emotional dependence on each other is a better story.

What’s the famous quote from “The Man Who Shot Liberty Valance”? “When the legend becomes fact, print the legend.”

Debbie Reynolds and Carrie Fisher -- both their lives and their deaths -- are now officially legends.