Kia, Ford Get Out Ahead In Auto Show Buzz 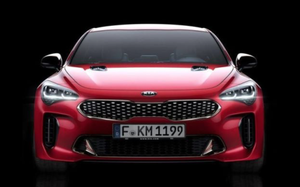 DETROIT — The show floor of the North American International Auto Show doesn't officially open to the media until 7 a.m. Monday, but several automakers are jumping the gun in hopes of getting their brands and vehicles into the news first.

Kia unveiled a brand new model Sunday night, the 2018 Kia Stinger GT, a rear-wheel-drive sedan with 365 horsepower. Kia told the media gathered for the reveal at an ultra edgy warehouse in Detroit that the model will compete against Audi, Lexus and BMW, and other luxury vehicles.

The car will have a halo effect on the entire brand because no one expects Kia to have a vehicle like this in its lineup, said Albert Biermann, Kia head of vehicle test and high-performance development, who was previously VP of engineering at BMW.

“For the Kia brand, the Stinger is an explosion,” Biermann says. “Not just the way it looks, but also the way it drives. It’s a whole different animal.”

“It’s a special moment in my career, really,” Schreyer said.  We’ve done a lot of great cars, and I’m very proud of them. But this is something special.”

The automaker will hold an additional press conference on Monday afternoon with more details about the Stinger.

Earlier Sunday, Ford introduced its new 2018 Ford F-150 to the world during the FOX NFL Wildcard Pregame Show. Ford is the Official Truck of the NFL. The truck will be revealed to the media Monday morning at the North American International Auto Show in Detroit.

The new F-150, which goes on sale this fall, delivers on its “Built Ford Tough” promise through a segment-exclusive combination of advanced materials that are durable and inhibit corrosion.