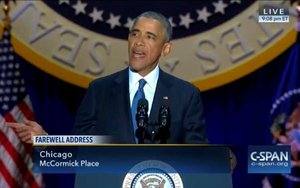 The “splintering” of media has resulted in Americans “sorting” themselves into small groups, “retreating” into their own “bubbles” and thereby closing their minds to the opinions of others. The situation is a “threat” to our democracy. So said President Obama in his farewell speech to America Tuesday night.

The portion of the speech in which the president decried the “bubble” effect of media came at around the 25-minute mark, not long after he exhorted Americans to take up the advice offered by a fictional character -- the oft-quoted southern lawyer Atticus Finch in “To Kill a Mockingbird” who counseled his daughter to try to see things from the perspective of others.

President Obama, it seems, thinks too many Americans are intolerant and dismissive of those who are not quite like them. This was the portion of the speech in which he talked about immigrants and discrimination.

“Going forward, we must uphold laws against discrimination …,” he said. “That’s what our Constitution and highest ideals require. But laws alone won’t be enough. Hearts must change.

“If our democracy is to work in this increasingly diverse nation, each one of us must try to heed the advice of one of the great characters in American fiction, Atticus Finch, who said: ‘You never really understand a person until you consider things from his point of view … until you climb into his skin and walk around in it’ …

“So regardless of the station we occupy, we have to try harder; to start with the premise that each of our fellow citizens loves this country just as much as we do; that they value hard work and family like we do; that their children are just as curious and hopeful and worthy of love as our own.

“None of this is easy,” he said -- and here’s the part where he mentioned social media and the splintering of media. “For too many of us,” he said, “it’s become safer to retreat into our own bubbles, whether in our neighborhoods or college campuses or places of worship or our social media feeds [italics added], surrounded by people who look like us and share the same political outlook and never challenge our assumptions.

“The rise of naked partisanship, increasing economic and regional stratification, the splintering of our media into a channel for every taste [italics added] -- all this makes this great sorting seem natural, even inevitable. And increasingly, we become so secure in our bubbles that we accept only information, whether true or not, that fits our opinions, instead of basing our opinions on the evidence that's out there. This trend represents a third threat to our democracy. …”

For the record, the other two threats were economic inequality and racism (including the things he said about discrimination, immigrants, xenophobia, etc.). That is, I think that's what he said. Sorry, but I tend to zone out when presidents lecture me about the Constitution, which is how the president started his speech last night.

But as a media-centric chronicler of TV and related media, I tend to sit up (if not wake up) and take notice when a U.S. president cites the fragmentation of media as a threat to our very democracy. Ever since the speech, I have pondered what he said. Is he right? I asked myself. Is the bubblization of media really a threat to our country? What was he really saying? Don’t believe everything you hear on Fox News?

The president's speech was seen on all of the usual channels Tuesday night. He delivered it before an audience of appreciative Chicagoans, including Mayor Rahm Emanuel, who was once Obama's White House chief of staff.

This president has a pleasant way with public speaking. He is rarely monotonal and dull. One of the moments being highlighted today, on Wednesday, was the tribute he paid to his wife, Michelle, and Vice President Joe Biden, who he referred to as a brother.

After the speech, you could watch on C-Span as the president worked the crowd, greeting and embracing old friends. It was a nice scene. At one point, he was even handed a tiny baby, seemingly a newborn (or recent-born), and posed for a photo. A politician kissing babies -- an American political tradition if there ever was one.