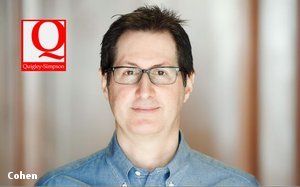 Cohen -- who headed media operations at Omnicom’s OMD and Interpublic’s Initiative before co-founding startup Giant Spoon in 2013 -- said he was attracted to the data-driven and results-oriented shop because of its size, independence and focus on media strategies that perform for clients.

“Performance media is where it’s at. It’s the new programmatic,” Cohen told Media Daily News on the eve of today’s announcement.

Cohen, who is best known for his creative and “big ideas” approach to media, said marketers still want the sizzle, but they want to be able to tie it to scientific results.

“The combination of performance with creative ideas is lethal,” he said, adding Q-S had already been heading in that direction and his goal is to accelerate it by attracting more talent and pitching and winning clients that want to execute on it.

Cohen, who will be based in Q-S’ New York operations, begins with some East Coast new business pitches this week, followed by a trip to Q-S Los Angeles headquarters and West Coast pitches next week.

After formally stepping down from Giant Spoon, Cohen said he was torn whether to “go back” to a big agency holding company, take a role at an advertiser or in the media. But he felt working at an up-and-coming independent agency offered the greatest opportunity for “reinvention” and “to leave my mark on something.”

Before co-founding Giant Spoon, Cohen was CEO of the U.S. operations of Omnicom flagship OMD; earlier, he ran West Coast operations of Interpublic’s Initiative. Prior to that, he was head of marketing for some of the world’s biggest media and entertainment brands -- Fox, ABC and NBC -- and has a reputation for trying new, innovative approaches to media and marketing.

Cohen said he was loath to take another role inside a big agency holding company, because of the inertia and bureaucracy involved and was attracted to the entrepreneurial spirit of Q-S co-chairs Gerald Bagg and Renee Hill Young.

The CEO role had previously been held by Angela Zepeda, who left in November 2016 to take a senior role at Innocean.

Founded in 2002, Q-S now boasts an organization of 150 people and $500 million in annual billings and services accounts, such as Procter & Gamble, Chase, among others, and considers itself the pioneer of “brand-response advertising.”

Call it what you want -- the concept of data-driven, results-oriented marketing is all the rage on Madison Avenue, where just about every shop is striving to reinvent itself by combining the best of data-driven science with creative ideas and sizzle.

Omnicom’s Hearts & Science was the hottest shop of the past year, and Dentsu Aegis’ acquisition of performance giant Merkle was the most celebrated M&A deal.

Terminology like “programmatic,” “performance,” “direct response,” CRM and various forms of “below-the-line” marketing have grown fungible, he noted, but the clear path is in “linking the creative and media teams, as well as innovation” with data, analytics and performance metrics that can tie media to explicit consumer actions.

Cohen said he retains no business or financial interests in Giant Spoon or Omnicom, which has an interest in it. He is proud of that agency’s growth, noting it has grown tenfold from its original four founders to a team of 40 in New York and Los Angeles.

With an organization three or four times that, and established roots with big clients, Cohen said his goal is to accelerate Q-S growth by combining media, innovation, ideas and creativity with measurable results.