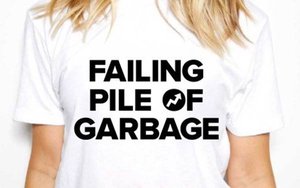 President-elect Donald Trump turned his media criticism to BuzzFeed this week — and the site responded in a way he should appreciate. It launched a line of merchandise with Trump’s words on them.

In a press conference Wednesday morning, Trump called BuzzFeed a “failing pile of garbage” after the site published a controversial set of documents, with caveats, that listed unverified and compromising allegations against him.

That afternoon, the company launched a limited-time collection of merchandise with the words “Our Failing Pile of Garbage” on bumper stickers, T-shirts and small garbage cans, according to Adweek.

BuzzFeed sold out of 100 limited-edition garbage cans it put up on its online store.

The sale ran through midnight.

Proceeds were donated to the Committee to Protect Journalists, a nonprofit that promotes press freedom worldwide. It recently received $80,000 in donations after Meryl Streep gave the organization a shoutout during her Golden Globes acceptance speech last weekend.

A BuzzFeed spokesperson told Adweek the company raised $25,000 for the CPJ.

The group behind the lightning-fast launch of the merchandise was Buzzfeed’s Product Lab team. They also turned the company’s viral cooking vertical Tasty into a cookbook that sold more than 100,000 copies since its launch in November.

This isn’t the first time Trump’s media criticism has backfired.

When he tweeted that Vanity Fair was “way down, big trouble, dead,” the magazine gained 13,000 new subscribers over the next 24 hours, a 100-fold rise in average daily subscriptions. Vanity Fair even turned the phrase into a marketing campaign, with a banner ad on its Web site that read: "The 'way down, big trouble, dead' magazine Trump doesn't want you to read! Subscribe now!"

In addition, media analytics firm Jumpshot found the Web traffic to 12 news sites deemed “failing” by Trump over the last year increased across mobile and desktop, with an average growth of 23% compared to the previous year.

Call it the Trump bump.