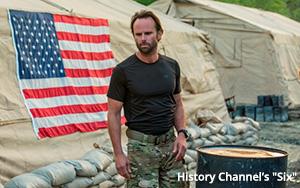 History Channel's SEAL-team drama “Six” plays like a throwback to the post-Vietnam ’80s when movie action heroes bent on rescuing their captured comrades were all the rage.

Whether they were Col. James Braddock in the “Missing in Action” movies (Chuck Norris) or John Rambo (Sylvester Stallone), these highly trained warriors for justice and brotherhood were determined to never leave a brother in arms to rot or be tortured by his captors in some faraway, godforsaken land.

In a nutshell, that’s the scenario in “Six,” which has the proverbial band of brothers coming together on a mission to free one of their former members who has fallen into the clutches of Boko Haram in far-off Nigeria.

Premiering Wednesday night (January 18) on The History Channel, “Six” is an eight-episode, macho action series that is not at all historical. It's fictional, although History Channel's press materials take pains to position it as true to life. To drive this point home, the word “authentic” is used twice, in two consecutive sentences, in a History Channel press release.

“The series authentically captures the inside world of America's elite Special Operations unit -- what these SEALs do, their personal lives, combat and the life-and-death decisions they make to protect and serve their country,” the press release said. "'Six' is an authentic portrayal of what it means to be a member of SEAL Team Six, a true brotherhood, the best at what they do.”

The premiere episode, which History Channel provided for preview, then goes on to portray these SEALs as troubled souls. They are underpaid, and the pressures and responsibilities of their jobs wreak havoc on their marriages.

At least two of them seem to be suffering symptoms of what used to be known as battle fatigue, which comes across in “Six” like the movie stereotype of the “crazed vet.”

One of the PTSD sufferers even executes a captive in cold blood for no particular reason, shocking some -- but not all -- of his team members. This is the character named “Rip” (played by Walton Goggins, pictured above) who eventually leaves the SEALs for work as a private security “contractor.”

It is he who is taken captive by Boko Haram militants while on a job helping to protect a girls' school in a remote Nigerian village. It should go without saying that the people who hired his firm for security should demand their money back.

In any case, when his former SEAL teammates get wind that he is been captured, they drop everything they are doing to rescue him. This mission gets underway in the closing minutes of Episode One.

“Six” will appeal principally to young male viewers with military fantasies but no real-life experience other than video games, which this show's action sequences closely resemble.

When they are not knocking off bad guys in the dusty neighborhoods of Middle Eastern towns, the SEALs can be seen knocking back a few cold ones, engaging in macho initiation rites with new team members, and having sex (with women).

But when duty calls, it's pants up and beer mugs down. These macho men have a manly mission to manage, and nothing will stand in their way.

Is “Six” as “authentic” as History Channel says it is? That determination is best left to any real SEALs who might tune in and watch this series. To a non-SEAL, “Six” plays like an “authentic” copy of too many movies and TV shows that have come before it.