Trump's Inauguration Is Like The Finale Of A Very Long, Real-Life Reality Show 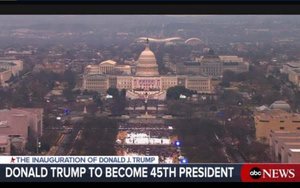 It’s a proud day on the TV beat when someone we TV columnists and reporters actually know gets sworn in as president of the United States.

Maybe this was how long-time journalists on the Hollywood beat felt when Ronald Reagan was inaugurated -- a mixture of disbelief, some skepticism, and mostly just awe. This guy became president? Wow!

Sorry, political journos -- Donald Trump isn’t one of yours. He’s one of ours. To a much greater degree than you, we get him. He’s a type we know well.

The theory from here, after nearly 18 years of covering competition-style reality TV shows (starting with the first sensational season of “Survivor” in summer 2000), is this: Trump modeled his campaign on the elimination process in those shows.

In the presidential campaign, the reality-TV “challenges” were the frequent televised debates, first between all of those Republican nomination hopefuls and then the Democratic nominee. Trump used the debates to steadily knock off his competitors.

The “judges” were the American people, or at least those select few who were surveyed by the pollsters after each “challenge.” The poll results served as elimination criteria for this reality show. Go too low and a candidate was relegated to those “second-tier” debates that weren’t on in prime time. Go lower than that, and your campaign was over. “You’re fired,” to be precise.

Friday’s inauguration spectacle is like the live, two- or three-hour finales that networks stage for reality-show season finales -- like the final tribal council on “Survivor,” the epic New York fashion shows on “Project Runway,” and the final boardroom confrontation on “The Apprentice.”

You might say we already had the epic series finale on a show you might call “Who Wants To Be President of the United States?” back on Election Night November 8 when Trump won.

But Friday’s inauguration is when the “reality” of this reality show really sets in. You might even consider this show to be like an elaborate epilogue to the show.

However, with today’s inauguration, the TV beat officially loses Donald Trump to the political beat. Sure, he’ll still turn up on TV from time to time (for example, you’ll see him being interviewed by Bill O’Reilly during the Super Bowl festivities February 5 on Fox), and maybe a TV columnist will write on these appearances from a TV perspective.

But for all intents and purposes, the Trump reality TV show is over. Unless I miss my guess (which wouldn’t be the first time), President Trump will not likely be the topic of nearly as many of these TV blogs in 2017 as he was in both 2015 and 2016.

Of course, he could surprise us because, after all, that’s what the man does. He is nothing if not continually surprising -- zigging when he’s expected to zag. For all anyone knows, he’ll make TV news this year -- perhaps continuing to appear frequently on late-night comedy shows, for example, while staying away from the “serious” political talk shows.

But that just might be wishful thinking. Never again (or least for the next 4 or 8 years) will TV-beat journalists know the joys of a Donald Trump news conference at 30 Rock or Trump Tower announcing the contestants who will be seen on the upcoming, new season of “The Celebrity Apprentice.”

Nor should we expect any more Trump thank-you notes like the one he wrote to me in 2005 (dated May 23). “Dear Adam,” started this typewritten note on stationery on which the words “DONALD JOHN TRUMP” were printed at top-center in tasteful, blue type. “Thanks for the nice mention in your [TV column]. While you like The Apprentice [italics his], I like your reviews!

“With best wishes [the phrase underlined by hand in thick marker], Sincerely,

“Donald” [the signature written with the same marker, perhaps a medium or bold black Sharpie]

Well, “Donald,” you are now president of the United States. Best wishes to you too.

journalism, news, politics, tv
3 comments about "Trump's Inauguration Is Like The Finale Of A Very Long, Real-Life Reality Show".
Check to receive email when comments are posted.
Read more comments >
Next story loading