FTC Chair Edith Ramirez To Step Down In February 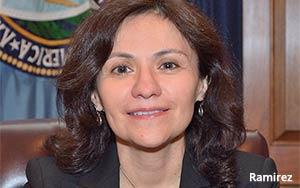 Among other recent cases, the FTC brought charges against Turn over its use of "supercookies" (a tracking technology that allowed Turn to recreate cookies that users had deleted) and mobile ad company InMobi, which allegedly illegally collected location data from "hundreds of millions" of consumers.

Ramirez's FTC also took on AT&T in 2014, suing the carrier for allegedly duping more than 3.5 million consumers by selling them unlimited data, but significantly slowing their broadband connections after they exceeded monthly allotments of 3GB or 5GB, depending on their phones.

(In 2015, AT&T revised its practices; the company no longer automatically slows down customers with unlimited data who exceed their caps, but still throttles them when the network is congested.) An appellate court recently dismissed the FTC's lawsuit. The agency is currently seeking to reargue the case.

Ohlhausen reportedly is seen as the leading candidate to replace Ramirez as chairperson. While Ohlhausen has voted with the FTC's Democrats on many matters, she also has broken with them on some privacy issues.

In 2015, Ohlhausen dissented from the decision to bring an enforcement action against analytics company Nomi Technologies, which tracks consumers in retail environments. That company allegedly failed to live up to a promise in its privacy policy, which said consumers could opt out of retail tracking “at any retailer using Nomi’s technology.”

Nomi didn't actually require its 45 retail clients to disclose whether they used the technology, and most of its clients didn't voluntarily do so, the FTC said in its complaint against the company.

In her dissent, Ohlhausen said  Nomi was “a young company that attempted to go above and beyond its legal obligation to protect consumers.” She also said the decision to prosecute Nomi could encourage other companies to “do only the bare minimum on privacy.”

"If the FCC wished to be consistent with the FTC’s approach of using prohibitions only for widely held consumer preferences, it would take a different approach and simply require opt in for specific, sensitive uses," Ohlhausen said last year in a speech delivered at a Free State Foundation conference.

Ramirez, by contrast, praised the FCC's regulations. "The rules will provide robust privacy protections," she stated after the FCC's 3-2 vote last October.