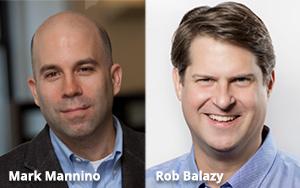 Mannino, who previously served as GM of the Amazon Advertising Platform, will lead the sales teams at Yieldbot.

Prior to Amazon, Mannino was an executive at MediaMath, Motionbox, WhenU and Bain.

Previously, Balazy was the CEO at Lycos, Inform Technologies, and HapYak. He also held executive positions at Shareaholic, NameMedia and Register.com. Before that, he served on the business development team that created Google AdSense.