Day Of Days: TV Will Be Focused On One Man Tomorrow 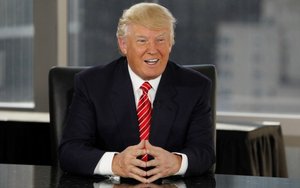 Productivity in the workplace will hit an all-time low on Friday as Americans take in the inaugural festivities from Washington.

Their medium of choice will be television, although the swearing-in will also be streamed. Good luck watching it there. For my money, TV is still the only place where you are 99.9 percent certain that you will see everything.

The 0.01 percent uncertainty is just my way of hedging my bets here. The odds don’t favor any audio or video disruptions occurring during the networks’ live coverage of Donald Trump’s inauguration. The Russians aren’t very likely to attempt a hacking of the airwaves during this thing, are they?

So the nation will be transfixed by this most unlikely of spectacles. The headline afterwards -- “Donald Trump Sworn In As 45th President of the United States” -- will still seem strange to some (if not many). Not too long ago, the only place you might have come across a headline like this would have been The Onion or a Will Ferrell movie about the future. What’s next? “College Of Cardinals Elects Mr. T As New Pope”?

Hopefully, the inauguration of Donald Trump will come off with all of the solemnity that has long been traditional for these quadrennial events. Just hazarding a guess here, but with one hand on a bible, Trump will likely be unable to live-Tweet the oath-taking. He will hopefully be similarly encumbered while delivering his inaugural address.

For the duration of the swearing-in festivities, the attention of TV cameras will be squarely on Trump and those gathered around him on the inaugural platform on the south side of the Capitol building -- including the outgoing president and his family, dignitaries and other officials. Hillary Clinton will also be there, reportedly. Remember her?

But how long will the network attention span be? Distractions abound, including the one man who the networks will also be trailing attentively all day -- Barack Obama.

The situation revives memories of Jan. 20, 2001 -- the day George W. Bush was sworn in as president No. 43. I had already begun writing a column about how the networks covered the inaugural events that day for the newspaper where I then worked, when my phone rang.

It was the editor of the paper with a “suggestion” for an angle I might “consider” for my column. It was his contention that the networks paid more attention that day to the exiting of Bill and Hillary Clinton than to George Bush inaugurating his presidency. Might this be a possible jumping-off point for today’s TV column about the Inauguration Day coverage?

Yes, it just might, I thought -- applying one of my cardinal rules of journalism, which is: Newsrooms are not democracies; in almost every instance, it is prudent to do what the editor says. This particular editor happened to be a very genial guy who rarely interfered with my work, so I had little problem steering my column that day to the angle he “suggested.”

It was true that at various points during that Inauguration Day, the TV coverage had veered toward scenes of Bill and Hillary leaving, perhaps at the same time that George and Laura Bush were waving to onlookers in the inaugural parade.

The editor’s goal here was to frame the networks’ coverage that day as an example of the mainstream media’s liberal bias. To him, the attention the networks paid to the Clintons at the expense of the Bushes was evidence of this.

At the time, I didn’t wholly agree with his point of view, but I dutifully paid it some lip service in the column. Here we are in 2017, however, and I am more inclined to look for signs of bias than I was so many years ago. That’s what journalism has come to.

The truth is, Trump’s assumption of the presidency and Obama’s leaving are both simultaneous news stories of equal weight. And the coverage on Friday should reflect this, to the extent that such a thing is possible.

My former editor was really referring to a difference of attitude where the coverage of the Clintons and the Bushes were concerned, not really the minutes devoted to each.

To him, the coverage reflected the liberal media’s sense of loss over the end of the Clinton administration, and a decided lack of celebration over the inauguration of a Bush presidency. The potential is even greater now for this attitude to come through in the coverage of Obama and Trump on Friday.