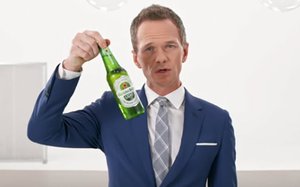 Heineken Light is getting an early jump on 2017, launching the first of three new TV spots for the year starring longtime brand spokesperson Neil Patrick Harris.

In the first 15-second ad (below) in this latest installment of Publicis New York’s “Best Tasting Light” campaign, Harris notes that “they said it was impossible to have great-tasting light beer,” but “boom … award-winning Heineken Light, brewed with cascade hops …”

“They said it was impossible to hypnotize you,” he adds, but then gives it a facetious try, waving a Heineken Light back and forth and suggesting, “You are getting sle-e-e-py …”

Although Harris doesn’t explain the significance of cascade hops, beer lovers presumably know (or will find out) that those hops are, according to the brand’s PR, “commonly found in craft IPAs and known to be the best hops grown in the U.S.”

In addition to TV and YouTube, the new ad is embedded at #heinekenlight.