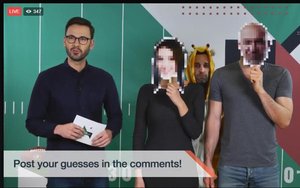 Wix.com on Tuesday took to Facebook Live and YouTube Live to launch the first spot of its Super Bowl LI campaign.

This is the company's third time participating in the Super Bowl ad lineup, but the first time it will roll out the campaign live online.

This year, the theme focuses on Wix and its 98 million registered users, as the company tells its story through well-recognized names and faces, such as action stars Jason Statham and Gal Gadot.

Felix, the chief and Wix customer in the campaign spot, is really the superhero. After his fancy restaurant explodes in flames, he starts over, but this time the restaurant is a food truck. The voiceover announcer explains that in order to "succeed in a disruptive world, Wix makes it easy to create your own stunning Web site."

"Enable is the keyword that embodies the company's philosophy," said Omer Shai, CMO of Wix. "There are two super celebrities in the spot, but the real hero is Felix, the user," he said.

This campaign speaks to a disruptive world and how Wix supports users. The company describes it as "choreographed chaos."

Shai declined to provide details on the investment or the returns from Super Bowl campaign running in 2015 and 2016, but said the cross-channel campaign increases searches and video views on sites like YouTube.

The 2017 campaign features a series of short films including the 30-second commercials for Super Bowl LI, directed by Louis Leterrier. He is known for his work on the Transporter films "Unleashed," "The Incredible Hulk," "Clash of the Titans" and "Now You See Me."

Wix called on the San Francisco creative team of Jeff Huggins and Andrea Janetos to produce this year's multichannel series.

It came as no surprise that Wix returns to the Super Bowl in 2017 after having stellar success in 2015 and 2016. Last year, Wix ran a series of four clips centered on Kung Fu panda's Po or one of his fighting friends. Each started with a message that businesses should start with building a Web site to get more customers.