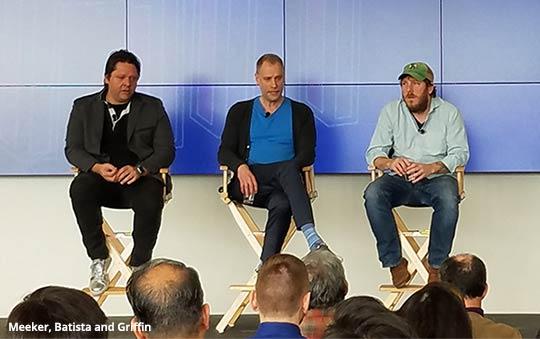 Augmented reality can ultimately create valuable experiences for consumers, but the current state of the capability also has its limitations.

This was the main takeaway from a panel discussion between agency executives at AR in Action, a two-day summit at the MIT Media Lab in Cambridge.

Batista, who is the co-founder and chief creative officer of BEAM, said that using a smartphone-based AR app creates additional levels of friction to the user experience. With this approach, a brand’s app needs to be installed on the consumer’s smartphone and the consumer needs to launch and scan a QR code or similar action before the value of AR can be realized.

This can limit the overall scalability of AR projects, the panel agreed.

Meeker, who is the VP of Isobar U.S. and heads the agency’s NowLab innovation arm, said the same frictional experience carries over to using beacons to trigger messaging since a similar level of actions are required before brand experiences can be initiated with a consumer.

The addition of voice interaction to the mix could ultimately solve for some of the current friction imposed in AR implementations and general smartphone use, according to Griffin, chief innovation officer at Almighty. Griffin discussed the idea of designing the user experience around voice so the step of removing a smartphone from a pocket is no longer needed.

This would likely then require some sort of head-mounted display for AR, but the overall engagement would be done through voice. The market would need to catch up, in terms of user behaviors adopting voice-first interaction, but Griffin says this is a logical next step.

On the agency side, cost seems to be a pain point. One of the driving factors for high cost in AR is that everything typically needs be built from scratch and as a custom platform, according to Griffin.

Isobar’s Meeker also discussed the cost in creating the experiences, which tends to start higher than more traditional mediums and increases substantially with added complexity.

In a separate presentation, Meeker discussed the paradox of clients seeing top-level examples of AR and MR (mixed reality) in proof-of-concept examples from Microsoft and Magic Leap and expecting those results. In that presentation, Meeker asked if the industry as a whole is over-promising the possibilities, within reasonable budgets, of the platform.